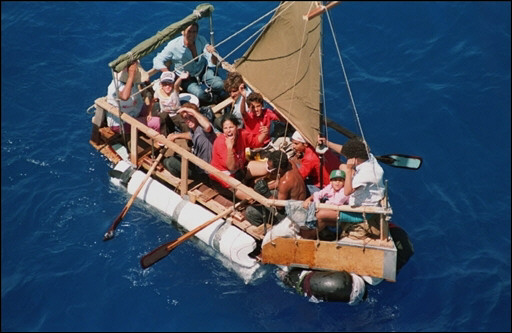 For “Cuba Experts,” Castro sycophants, and supporters of the Cuban dictatorship here in the U.S., the “reforms” of dictator Raul Castro are nothing short of marvelous. For actual Cubans, however, throwing yourself into the shark-infested waters of the Florida Straits in an attempt to escape those “reforms” is still a viable option.

Seven Cuban migrants have been returned to Bahia de Cabañas, Cuba, after arriving off the Keys.

The Cuban migrants arrived May 18 east of Card Sound Bridge in a rustic boat that was taking on water, the U.S. Coast Guard said. A Coast Guard Air Miami helicopter and Coast Guard Station Islamorada boat crew responded to the scene after getting a call from a passerby.

The migrants were removed from the boat and given food, water, shelter and basic medical attention.

Under U.S. law, Cubans who are intercepted in the sea are usually returned to Cuba. Those who made it on dry land are permitted to stay.

They were escorted back to Cuba Wednesday afternoon in the Coast Guard Cutter William Flores, a 154-foot Miami-based fast response cutter.

The seven were part of the 573 Cuban migrants returned to Cuba by the Coast Guard nationwide since the start of the fiscal year on Oct. 1. Most of the migrants are sent back from Miami.