The Economist turns logic on its head and explains why the game of golf is a “revolutionary pursuit” in Castro’s Cuba:

Why is playing golf a revolutionary pursuit in Cuba? 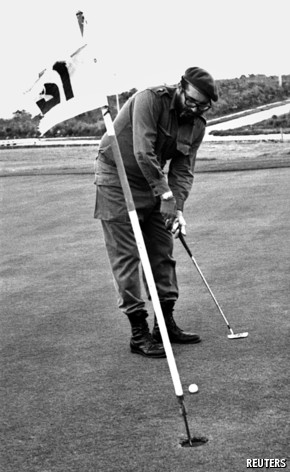 AFTER the 1959 revolution, Fidel Castro denounced golf as a “bourgeois” hobby. Though he once played a round with Che Guevara, the comandante preferred ordinary Cubans to participate in earthier sports, such as baseball. Despite demand from visiting foreigners, no new golf course has been built in Cuba since the revolution. The island has only one rather shabby nine-hole course in Havana, as well as a full-size course in Varadero, a tourist town. But the government has just given developers permission to build an enormous new golf resort, promising “a whole new policy to increase the presence of golf in Cuba”. Why has the frivolous hobby of the bourgeoisie suddenly become permissible to revolutionaries?

But the main reason for the sudden enthusiasm for pitching and putting is a need to attract more tourists. The island pulled in 2.8m visitors last year, far fewer than the 4.6m who flocked to the Dominican Republic, its smaller neighbour. Cuba faces the disadvantage that America, which lies only 100 miles away, makes it very difficult for its own citizens to holiday on the island (try searching for flights to Havana on an American website and you will have no luck, wherever you are from). Now, unstable regional politics make it more crucial than ever for Cuba to pep up income from tourism. Venezuela, whose petrodollars have propped up the Cuban economy for years, is ploughing into an economic crisis. Its new president, Nicolás Maduro, has pledged loyalty to the Castros but is far less popular at home than his predecessor, Hugo Chávez. Meanwhile, recent attempts to find oil in Cuban waters have drawn a blank.

The revolution therefore needs golfers. The $350m Carbonera Club, to be developed by Esencia, a British firm, is the first project to get the go-ahead; another course is expected to be complete by the end of the year. A 1,300-berth marina, the largest in the Caribbean, is to be built in Varadero. And the island’s airports are to be upgraded, with help from Brazil’s development bank. At the same time, the government has signalled that several foreign businessmen who have been held on suspicion of corruption for nearly two years will soon face trial. Their hearings are due to begin this month, in what some believe may be a first step towards eventually freeing them. Cuba’s politics remain as opaque as ever, but it looks as if the island is gradually opening for business.

In other words, The Economist surmises that the idealistic revolution, which supposedly eschewed bourgeois habits and practices in its stated quest for egalitarianism, has become a bourgeois caricature of its self in its desperate search for cash. Apparently, they missed the tiny fact that Fidel Castro, Raul Castro, and their entire family are and have been for decades multimillionaires who live the ultimate bourgeois lifestyle with Swiss bank accounts and hanging out with the jet-set crowd.

But hey, since when did Cuba’s true history ever matter?