By Fabian Flores in Translating Cuba:

How Much Does It Cost to Have a Child in Cuba? 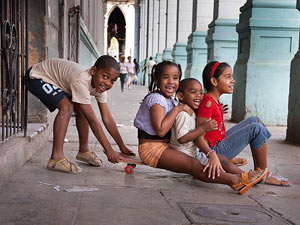 HAVANA — For the second year in a row the London-based organization, Save the Children, has identified Cuba as the best country in Latin America to be a mother. I suspect that the author of this report visited a Cuba on another planet rather than the one in which the mother of my children has to get up every morning.

Millions of Cuban mothers, having embarked on the heroic task of raising their children in a country in ruins, will celebrating Mother’s Day this Sunday. Thinking about this, I decided to investigate how much it really costs to bring a child into the world in the Caribbean’s largest country.

The findings explain in part why the Cuban population remains almost unchanged at around 11,000,000. The annual growth rate in 2011 was 0.6%, the first increase since 2006 according to figures from the National Office of Statistics and Information (ONE). Projections indicate that the population with continue to decrease and that by 2025 the island’s population will still be under 12,000,000.

A woman can count on regular medical attention from the moment her pregnancy is officially confirmed. Each expectant mother receives a daily dose of iron along with a vitamin supplement called Prenatal.

However, a prescription for these vitamins is usually not issued until after the second trimester of pregnancy rather than before. This is the opposite of what is customary in the world’s most medically advanced countries. Physicians themselves advise, “If you get prenatal medications from abroad, throw out the ones you were given here,” casting some doubt on the quality of the tablets Cubans receive.

A ration book or ration card will indicate that pregnant women are “entitled” to three or four pounds of beef a month as well as an equal quantity of fish.

The deterioration of medical facilities throughout the country makes childbirth a nightmare for most women.

Last year I was surprised to read a comment that got through the filter of an official website, Cubadebate, in response to an article from Save the Children praising Cuba. A respondent, identified as MG, wrote:

“Has anyone visited the maternity hospital ’Fe del Valle’ in Manzanilo, Granma Province??? Because anyone has been there, anyone who has had to put up with its conditions, anyone who has spent any time in childbirth would realize that this article makes absolutely no sense.

“My twin daughters were born last October in this HOSPITAL. There wasn’t enough bed space so they put TWO pregnant women in the same bed (I know that people won’t believe me, but it’s true). There are no washbasins to rinse your mouth in the morning. You have to drain the bathtubs by carrying buckets of water because the toilets are not connected to a drainage system. Just looking at the bathrooms makes you nauseous. The lobby and dining room have been converted to hospital rooms due to  lack of capacity. For those accompanying women having Caesareans, there are no chairs in the recovery area in which to rest, so they have to stand during the entire six-hour recovery period.”

Mothers-to-be are considered “worthy” of a basket of baby goods which include a sheet, and a handful of products. A typical basket consists of three pillow cases, two medium-sized towels, two baby bottles, two little rubber toys, a pantie, a pullover, four bars of soap, an eau de cologne, one tube of cream, one bottle of baby oil, ten muslin diapers, ten yards of sterile diaper cloth and some socks, all for around 85 Cuban pesos (CUP). 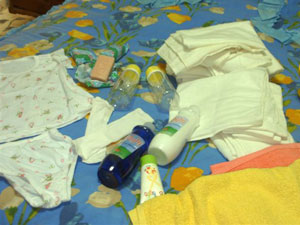 A basket of goods provided by the Cuban state.

If you work at a location affiliated with the official trade union, the Cuban Worker’s Central or a government ministry, these organizations will provide you with a more “enhanced” basket on a specific date if it is your first child.

How does one acquire all the products that are needed for a baby’s first year? The average monthly salary in Cuba is around 455 CUP, the equivalent of $20 or 20 CUC (convertible pesos).

Prices for the two most important items — diapers and milk — are exorbitant. Disposable diapers are not produced in Cuba and the purchase price in dollars — between four to twelve dollars a package — makes this product unaffordable for the vast majority of Cubans.

Baby formula is only sold to women whose doctors have confirmed they are unable to breast feed. In hard-currency stores a jar of the baby formula Nan costs a little more than 4 CUC. Other brands sell for 5 CUC.

In the network of government-owned stores, very few of which sell only baby-related goods, prices greatly exceed the average monthly salary.

“Most people do not buy baby articles in the state-run stores. Instead they get baskets sent to them from overseas,” says Marianela Frómeta, a housewife from Central Havana.

In government-run stores a sheet for a crib costs between 8 and 10 CUC while the crib itself varies from 100 to 120 CUC. A mattress to go with it will add about another 50 CUC. The cost of a stroller varies between 50 and 180 CUC, depending on the features.

But it is not just the “heavy artillery” that is costly in Cuba. Onesies (one-piece outfits called enterizos in Cuba) cost between 3 and 7 CUC. Underwear for either sex costs the same but can go for as much as 10 CUC.

A parent’s stress increases as a baby’s first birthday approaches. Baby shoes alone can cost up to 20 CUC, depending on the size and brand.

“In my case I put together my own basket with things from private stalls combined with what they gave me. I also had seamstresses sew things for me. It was the only way we could afford it,” says Marlom Silvera, a worker at an ironworks factory.

One of the best sources for acquiring a newborn’s necessities at lower prices is the parallel market. One of the most reliable is a place in Havana on 21st Street between 4th and 6th in Vedado. A private establishment with a wide range of products at more reasonable prices than the chain of state-run stores, it is still expensive for the average Cuban.

“We get most of our products from people who don’t need them anymore and/or who want to sell them, as well from traders who bring thing from Ecuador, the United States or Venezuela. We also have seamstresses who supply handmade items which are much in demand,” says the owner of the business, who does not want her identity made public.

As the owner explains it, the advantages for her customers are considerable.

“In the state-run stores a baby bottle costs between 1.50 and 5 CUC. Here they’re all 2 CUC. That’s why we have more customers. We also have items that you normally cannot find, like pacifiers, playpens and other accessories,” she says.

In the interior of the country mosquito nets are sold in the parallel market for 300 pesos (12 CUC) and muslin diapers for 6 pesos apiece.

The drama of food

This is one of the most critical subjects during a baby’s first months of life. The cereal supply is limited in the extreme and, when it is available, costs between 5 and 10 CUC a box.

“I think the most expensive thing about having a child is Cuba is his feeding. Produce and meat quickly eat up a month’s salary,” notes Joel Gutiérrez, a self-employed worker.

“At the local store they give you milk that is not of very high quality and some baby food that I it pains me to feed him,” he adds. “Sometimes you’ll get an imitation cereal called Fortachón, but it’s not enough. When will it all end?”

A similar opinion was echoed in remarks by the respondant “MG” in Cubadebate. He writes, “I am the father of twin girls and earn a basic monthly salary of 432 pesos. Do you know how much Nan-Pro baby formula costs? In the hard currency store one can sells for almost 5 CUC. That’s 125 pesos. When the girls were born they were not getting the formula they needed because in all of Granma (Province) this product, which is sold in pharmacies, was in short supply. The girls’ mother recently graduated, does not work and does not earn a salary. Do they think I can support two girls on my salary alone? You’ll spend an entire month’s pay on food for just one child in one or two weeks.“

Adding up the prices for a baby’s basic necessities after visits to various stores, we were able to calculate that the initial costs for raising a child in Cuba in the first six months of life vary from 700 to 750 CUC (depending on the prices individual stores charge).

This article is the result of an investigation lasting more than six months and carried out in collaboration with the editors of Café Fuerte.