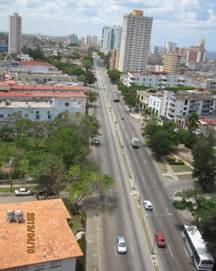 Without any hint of shame the state-run press reports that an American citizen attending a public presentation by her president at the National Defense University interrupted him and even questioned some of his policies in a rude manner according to several journalists present. The importance of this news for Cubans lies in the fact that this woman, as well as many other people in the United States and other democratic countries, have the right to do this. In our country on the other hand, not only would it be considered a serious action, you could also spend years in jail for it.

In another article it is reported that, in a session at the Ninth Congress of the Union of Cuban Journalists, someone posed the question, “What sort of journalism does Cuban socialism require to make it stronger as it goes through a period of change?” The replies all have a common denominator: to petition the state to act less as a guardian and to request authorization to be more critical, though always “being aware of the challenges that the country faces in the midst of the incessant and worsening harassment by the American government, which has not abandoned its goal of destroying the country’s socialist project…,” blah, blah, blah. Without the least embarrassment these journalists accept state control over what they write and report, and their appeal amounts only to “being allowed to write and report a little more.” It was always my understanding that rights are not something to be begged for, but rather to be demanded.

Another article mentions a “big tweet for Cuba” (a reference to the Five*, who by now, if my math is correct, are four), accompanied by a photo of a “stand in” at the front of the White House. As I indicated at the beginning of my post, how wonderful to be able to do all this freely, without anyone interfering! It is as safe and secure as a picnic. In democratic countries, that is, because if these things happened in ours, they would all be considered “destabilizing actions orchestrated by local mercenaries fulfilling orders from the empire.” That simple.

It is striking that presumably intelligent people would lend themselves to this sordid political game by participating in it as though they were performing a commendable action for which they deserve respect and even applause. I believe the solution to the problems between the governments of Cuba and the United States (and I say governments) must be through dialogue. I do not believe it can be achieved through tortuous paths, but through truth, honesty and frankness, assuming each lives up to its responsibilities.

*Translator’s note: Five Cubans serving prison sentences in the United States for espionage, for whose release the Cuban government has been actively and publicly campaigning. One of the four has been paroled and recently returned to live in Cuba with the permission of the American courts, in exchange for giving up his U.S. citizenship.