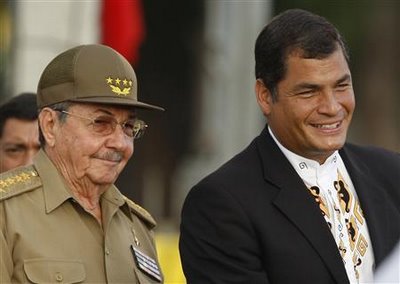 Ecuadorean “president” Rafael Correa continues his dictatorial takeover of Ecuador, following in the footsteps of Venezuela. Correa has never been shy about displaying his admiration for Cuba’s murderous Castro dictatorship and has on many occasion pledged to plunge Ecuador into the same Cuban abyss of repression and tyranny.

Like his fellow tyrants in Venezuela, Correa is quickly turning Ecuador into a Castro-style totalitarian dictatorship.

Via the Committee to Protect Journalists:

CPJ dismayed by approval of media law in Ecuador

New York, June 14, 2013–The new Communications Law approved today by the Ecuadoran National Assembly represents a severe blow to freedom of expression, said the Committee to Protect Journalists. The law establishes regulation of editorial content and gives authorities the power to impose arbitrary sanctions and censor the press.

“The approval of the Communications Law is the latest step in the deterioration of press freedom in Ecuador that has occurred under President Rafael Correa,” said Carlos Lauría, CPJ’s Americas senior program coordinator. “The restrictive provisions and vague language of this legislation run counter to constitutional guarantees and international standards on freedom of expression. The law not only undermines journalists’ ability to report critically but threatens the right of citizens to be informed about sensitive issues. This legislation puts into law a key goal of the Correa presidency: muzzling all critics of his administration.”