In spite of the fact these Cuban spies helped the Castro dictatorship murder four innocent American pilots from Brothers to the Rescue, it appears some U.S. Representatives are compelled to support them.

A couple of weeks ago, a group of (literally) pro-Castro activists (mostly foreigners) held a forum and march in Washington, D.C. in support of five (now four) Cuban spies imprisoned in the U.S.

It’s always fascinating to watch pro-Castro activists use democracy to support a dictatorship.

Donning their Che berets and “Viva la Revolucion!” signs, they marched in front of The White House and held various speaking engagements, including one (of course) at the Cuban Interests Section, where they held a teleconference with Rene Gonzalez, one the five spies who completed his prison term and was returned to Cuba (thus, now four remaining).

An item that was curiously on their agenda was a “Reception at Capitol Hill hosted by a U.S. Congressman.”

However, no details were included.

Was this U.S. Congressman too embarrassed to be hosting an event in favor of Cuban spies convicted in U.S. federal court for, among other things, conspiracy to commit murder and infiltrating U.S. military facilities?

Never missing a propaganda opportunity, the Castro regime’s state media revealed that the Congressional hosts were U.S. Rep. Bobby Rush (D-IL) and U.S. Rep. Yvette Clark (D-NY) — below is a picture of them at the event.

Apparently, there was even a video of the entire event also, but it has since been removed.

Are U.S. Reps. Rush and Clarke too embarrassed to be seen and heard praising the Cuban dictatorship and its spies?

Maybe not — but they should be. 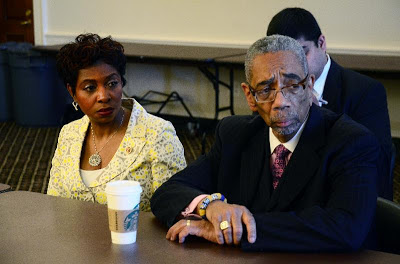