Is Castro Paving the Way for Snowden?

It sure sounds that way — or at least giving the “green light” for one of his South American cronies to do so.

Here is an English translation of last night’s statement from Castro’s Ministry of Foreign Affairs:

A few hours ago, several European governments denied or reneged, with technical excuses, overflight and landing permission for the plane of the President of Boliva, Evo Morales Ayma. This constitutes an inadmissible, unfounded and arbitrary act, which offends all of Latin America and the Caribbean.

Days before, the United Stated threatened Ecuador, a sister country, with coercive economic measures. This cannot be tolerated by any means, it injures all of our America and deserves international condemnation.

The foreign ministry of the Republic of Cuba is following with serious concern the events of recent weeks in relation to the significant denunciations of U.S. citizen Edward Snowden, which confirmed the existence of a global system of espionage carried out by the United States that trampled on the sovereignty of states and rights of individuals. 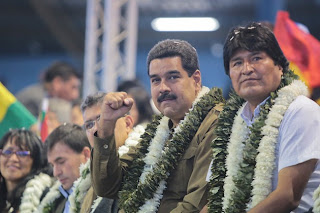