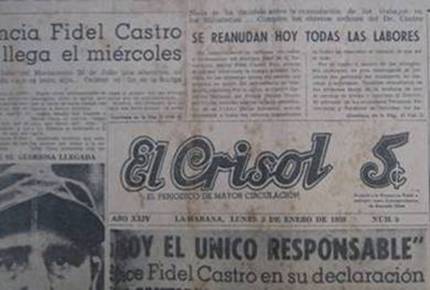 It all started very early, at the beginning of the seventies. Soon the Maximum figures of the triumph of the ’fifty-nine revolution, realized that they if they wanted to install themselves in power, firmly and indefinitely, they are going to have to take over the mass media of communication, in the then flat press, radio and television.

Soon the pressure started on the major newspapers in the country, still with their current owners. Then came the infamous “tagline,” a kind of explanatory note, that accompanied the news that the regime considered it ideologically dangerous, and it was imposed, supposedly, in the name of the workers of the daily in question (although no one ever consulted them). This was the apparently “innocent” but the germ of the iron censorship that would come next, and that continues to the present day.

That’s why the congresses of the UPEC (Union of Journalists of Cuba) are very striking, an organization created to replace the previous association of journalists and control and impose official criteria, where there are never inconsistencies, and the “suspicious unanimity” is which ensures all decisions taken in them. Always ignored in these meetings, are alternative journalism, civic and independent filmmakers whose creators are considered by the regime as “mercenaries of the empire.”

All this happens in a new universal context, where technology is almost uncontrollable by dictatorial regimes that still persist in controlling the mass media. That is why it is extremely sad and old-fashioned to talk about journalism in a country like Cuba, where Internet access is still very restricted and controlled by the government, as is the acquisition of foreign newspapers and magazines, and the possibility of listening to short wave radio without interference, to certain specific news programs about our country.

All this makes it increasingly difficult for the vast majority of the population, immersed in the tasks of survival, to know the reality in which we live. We hope some day soon to rescue our country and our culture, a free press, like that when Cuban had true masters in this important and beautiful craft.

2 thoughts on “Reports from Cuba: The Tagline, Putative Mother of Censorship”