The Castro dictatorship in Cuba has a well documented, half-century long history of violent repression with political executions numbering in the tens of thousands and political prisoners in the hundreds of thousands. Although severe and too often deadly violence against Cubans who dare to speak out and confront the tyranny of the Castro family’s apartheid dictatorship is to be expected, it certainly does not make these heinous and atrocious acts any more palatable.

In the past few days, the Cuban dictatorship’s vicious attacks against Cuba’s democracy and human rights activists and the brutal beatings of dissidents have been increasing.

Please see the picture below — in addition to the consequential disfigurement from multiple kicks to the head, he is also suffering from memory loss.

Ramirez forms half of the hip-hop duo, “El Primario y Julito,” which is know for its critical lyrics of the Castro regime.

His colleague, Julio Leon Fonseca (“Julito“) was also the subject of threats and an attempted attack earlier in the week by state security agents, but a group of his friends intervened and successfully prevented the attack.

You can listen to Fonseca’s declarations here. 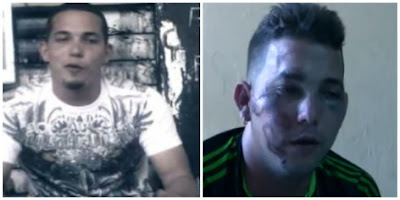 Pedazos de la Isla has disturbing video of the Cuban regime’s violent attacks, including the savage beating of a Lady in White in Altamira, Cuba, where a mob of Castro State Security organized thugs brutally beat her in the street, viciously tearing off her clothes:

Read the entire report behind this video at Pedazos de la Isla (in Spanish).

5 thoughts on “Cuba: Castro dictatorship unleashes a wave of violence against the island’s dissidents”