The latest case comes from Cuban dictator Raul Castro’s speech yesterday where he made the incredibly unlikely and completely improbable claim that power in Cuba was being gradually transferred away from him and his personal circle of friends and family and to the members of Cuba’s “younger” generation. 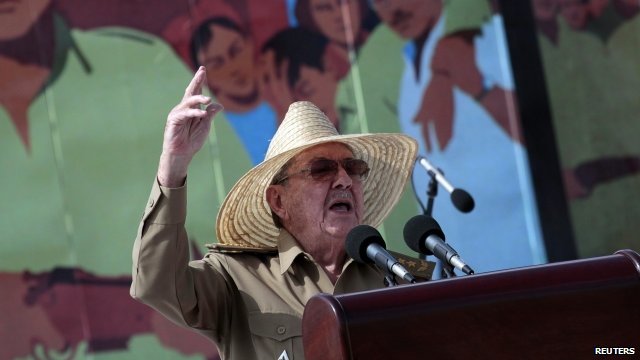 President Raul Castro has said power in Cuba is being gradually transferred, in a speech at celebrating 60 years since the start of the revolution.

The revolutionaries were giving way to a new generation who would keep socialist ideals alive, Mr Castro said.

In order to make this claim credible in any way, the BBC, Reuters, the AP, and the rest of these news agencies have to completely and totally ignore Cuban history under the tyrannical grip of the Castro dictatorship. And of course, they did.

I addressed this issue in the May 2013 print issue of The American Spectator magazine:

[…] The victims (and alleged victims) of the Castros’ jealous grip on power are strewn all along the roadside of their half-century journey of absolute control in Cuba. One of the first was Camilo Cienfuegos, a charismatic and popular Cuban revolutionary leader who fought to overthrow the Batista government alongside the Castros and Argentine revolutionary Ché Guevara. In 1959, just months after Fidel took control, Cienfuegos disappeared in a mysterious plane crash. No wreckage was ever found and no bodies were recovered. Some speculate that it was no mere accident.

More recently, there are the cases of Roberto Robaina, Felipe Perez-Roque, and Carlos Lage. All three of these men were high-ranking, high-profile government officials, brimming with media savvy and touted as natural successors to the Castro brothers. And just as their popularity and standing peaked, all three men were unceremoniously removed from their positions. Last year, Ricardo Alarcon, another high-profile representative of the Castro government and supposed successor, was unexpectedly removed as president of the National Assembly, a position he’d held for 20 years. There were no announcements, no retirement parties, and no explanations. His name was simply dropped from the list of parliamentary candidates released in December.

The Castro dictatorship’s pattern of propping up replacements, only to knock them down before they get too powerful or too popular, is painfully evident. For that reason, it is hard to believe that Raul Castro’s latest political moves are anything more than another ruse to deflect attention away from the ruling family.

You can read my article in its entirety HERE.