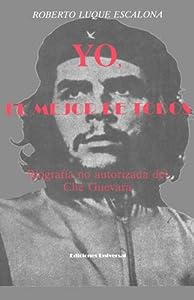 First, some background. Luque (his surname) wrote this book in Cuba, before he left in 1992, and it was published in Miami in 1994 without significant revision. In Cuba, the only sources available to him were the official ones, meaning Castro-approved, and since he was a known dissident (when that wasn’t at all cool), he couldn’t exactly go around digging for extra-official information. It’s not just that he would have been rejected, but that he could have wound up in jail for trying to “subvert” or “defame” St. Ernesto of the T-shirts. This means that his information was not only limited and incomplete but skewed, obviously in Che’s favor, and there was no other to be had. On top of that, like all Cubans on the island, he’d been exposed for many years to the full brunt of the regime-generated Che hagiography, with nothing on offer to counteract or “balance” the official mythology. Then, once in Miami and able to get the book published (by a local outfit, definitely not a major firm), there was the little problem of a Che bio written by a largely unknown anti-Castro exile, one of “those people,” with no academic credentials and not even the pretension of being a professional historian. Obviously, the prospects for the book weren’t very bright, certainly not outside Cuban exile circles. If Luque hoped to transcend that and reach a wider, non-Cuban audience, he could hardly afford to sound too “intransigent” or “reactionary” if he expected to get the time of day. I don’t know what his reasoning was, since I don’t know him, but I think it’s highly pertinent to keep the aforementioned considerations in mind while reading and assessing the book.

Whatever the reason, his tone throughout is remarkably civil, calm, even-handed and I would say respectful–far more so than the subject deserves. Luque’s sharpest barbs are aimed at Fidel and his Cuban minions, though it must be admitted that a Cuban screwing his own country and people is more damnable than a foreigner doing so. He does wonder, however, at one of the critical questions regarding Che: Why didn’t he ever show any interest in addressing the serious problems of his native Argentina?

The following are some salient points or things that caught my attention:

Che’s parents were upper-middle class socialists who welcomed socialist/communist exiles from Spain into their home after Franco won the Spanish Civil War, and Che was exposed to them.

His life was always irregular and scatter-shot, even before he got involved with Cuba–a jack of all trades and master of none. It is very unlikely that he completed medical school (and as has been shown more recently, there’s no record that he ever did so).

He apparently preferred or got along better with those who were or could be seen as inferior to him in terms of class and intellectual capacity.

He was capable of rather embarrassing flights of romantic fancy, such as when he referred to Fidel as “ardiente profeta de la aurora” (burning prophet of the dawn).

He evidently saw himself as an enlightened “chosen one,” and his behavior was that of a fanatic or zealot who believes the end justifies any means necessary to achieve it.

He once asked, referring to the years of President Prío just before Batista, “How can one imagine a revolutionary who didn’t denounce on a daily basis the inconceivable abuses of that time?” Those years definitely involved corruption, but Prío (popularly known as the “cordial president”) never interfered with civil liberties, and even if Che had been referring to the Batista era, those abuses pale next to what went on once Castro took over–specifically, the orgy of arbitrary executions that went on under the direct orders of Che himself (who considered the concept of legal evidence as bourgeois nonsense). It is not clear, however, how much Luque knew of Che’s direct involvement and its extent.

From 1959-1964, he was the #2 man in Cuba, and was given a series of major posts which he badly bungled, for the simple reason that he had no qualification for them. His economic ideas, such as they were, made an already dysfunctional system (socialism) even less functional. Next to Fidel, he was the biggest reason for the destruction of what had been a thriving Cuban economy, by way of nationalizing everything and making everyone an employee of, and dependent on, the state.

Che, unlike Fidel, was much more true believer than opportunistic liar, and his anti-Nature “new man” concept, which was adopted by the Castro regime, was analogous to a kind of Frankenstein monster, with predictable results.

In Cuba, the “revolution” triumphed fairly easily over Batista’s forces, which led Che to overestimate his own military prowess and the efficacy of guerrilla warfare, without giving proper weight to the distinct inferiority of Batista’s military, which was corrupt, inept and demoralized, not to mention unpopular. His delusional view of himself as a great guerrilla leader wound up being fatal, as it led him into the disastrous campaign in Bolivia.

In Bolivia, his first big mistake was to antagonize the head of the Bolivian Communist Party, whom he no doubt considered an inferior, and thus received no help from Bolivian communists. Things went from bad to worse. Morale was low, and Havana basically abandoned him to his fate while at the same time mounting a propaganda campaign falsifying or inflating his activities. The worse things got, the more delusional he apparently became, until he was finally killed. Luque, by the way, got the details of his death wrong because that’s how they were reported in Cuba to make the death appear heroic.

Luque theorizes that it would have been better for the Bolivian government to capture him, try him, give him a long jail sentence, and maybe after a few years trade him for Cuban political prisoners–thus avoiding the whole “guerrilla martyr” business. That, however, is much easier to say in retrospect.

Luque also relates an interesting anecdote I had not heard before, possibly because it came to nothing and was not reported outside of Cuba. In 1968, an enterprising Bolivian politician came to Havana bearing Che’s death mask, Che’s hands preserved in formalin (supposedly all that was left of his cadaver), and a copy of Che’s Bolivian campaign diary. Fidel, in what Luque calls “a fit of necrophilia that was both Soviet and Transylvanian,” proposed making a version of Lenin’s mummy with the mask, an empty uniform and the hands, obviously for public viewing in some sort of mausoleum. Apparently he changed his mind and the ghoulish idea was aborted, unlike most other “brilliant” ideas of Mr. Maximum.

Finally, Che said that revolutionaries, those lovers of the dispossessed, “must idealize that love for the masses, for the most sacred causes, and make it single and indivisible. They cannot descend with their little dose of day-to-day loving to those places where the ordinary man exercises it.” In other words, Che’s “love” was an abstract and generalized concept, not a down-to-earth and personal one. It was love for “the masses,” not individual people. This is a very typical trait among would-be messiahs and self-appointed redeemers of mankind. Like Marxism itself, it sounds good as theory or on paper, but reality and practice are altogether different, as the now overwhelming evidence clearly indicates.

This biography (in Spanish) is certainly well-written and worthwhile, interesting reading, but it cannot be taken or recommended as optimal, let alone definitive, due to the aforementioned problem with sources. Luque has acknowledged that if it were ever re-published (preferably in English), it should be revised. He admits it was probably a mistake not to revise it once he was in Miami, before it was issued, but he says he wanted to show what could be done by a non-official person in Cuba with all the limitations that involved. Seen in that light, he did an excellent job, but this brings up a peculiar problem, which is why I called the biography “curious.” One has to read the book to really understand what I’m talking about, but even though Luque is anything but squishy or soft on the “revolution,” as anyone familiar with his published commentary knows, his handling of Che in this bio is so measured that it’s almost genteel, not to say charitable, considering the nature of the beast in question. Part of that can be attributed to not knowing all the dirt, and part of it (I think) is the result of the relentless and pervasive pro-Che propaganda campaign mounted by the Castro regime, which he could hardly avoid living in Cuba. My point is that even someone indisputably anti-communist and anti-Castro CAN be affected by the Che BS if it’s sufficiently well-packaged and persistent. Maybe that explains the VERY curious soft-soaping of Che by Pope John Paul II. I expect Luque now sees Che in a harsher light, but I repeat, the Castro people, like Goebbels, don’t put so much time, energy and resources into propaganda for kicks or theoretical reasons–they know the shit works.