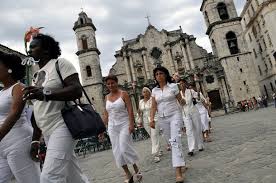 Another Sunday in Cuba, another day of violent repression by the Castro dictatorship against the Ladies in White.

Another Sunday in Matanzas, Cuba, another Sunday of government organized thuggery against some of the most valiant opposition activists on the island.

Martinoticias.com reports that seven members of the Damas De Blanco, or “Ladies In White,” and nine other human rights activists have been be unable to leave the Catholic church in the town of Cardenas because of a siege by a mob organized by Cuban police and the local “rapid response brigade.”

Similar repression against the Damas was also reported from Holguin.

Lady In White Leticia Ramos Herrería said the operation in Cardenas is larger than what was seen the two prior Sundays when the Damas and their supporters went to Mass and then took to peacefully marching through town. In response, government goon squads assaulted and arrested the activists.

“This will be a massacre today,” Ramos said. “We hold responsible the Castro brothers and State Security for all that might happen, for our physical safety.

Church and Cubans stand up to repression in Cuba this Sunday

Another Sunday in which Raul Castro’s paramilitary mobs and state security agents organized acts of repression against nonviolent activists. Nevertheless this Sunday offers cause for hope.  Ivan Hernandez Carrillo described two incidents that took place this morning in different parts of Cuba: