According to the report, “both sides agreed to the good state of bilateral relations, to strengthen links and expand cooperation.”

This visit comes amid the scandal of a North Korean vessel caught smuggling a Cuban arsenal through the Panama Canal, in violation of the U.N. Security Council’s arms embargo.

It is curious that Castro has chosen the 81-year old Balaguer to lead this trip.

He is a former Health Minister and Cuban Ambassador to the Soviet Union.

Most importantly, Balaguer is a close Castro confidant, which means they want to ensure the utmost secrecy in dealing with (and lying about) this crisis. 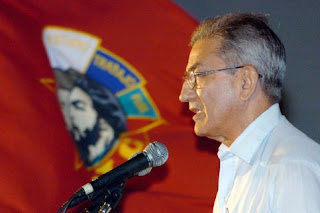