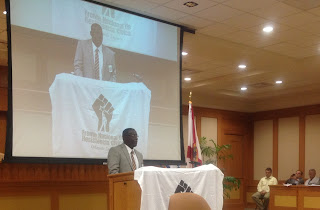 Jorge Luis García Pérez “Antúnez” addressed the Assembly of the Resistance at a forum held at Florida International University Law School on August 10, 2013. In his address Antúnez described how the opposition movement is progressing towards a national stoppage and appealing for justice for the many fallen martyrs.