Silvio Canto Jr. on his blog, My View:

The week that Soviet tanks crushed the Prague Spring 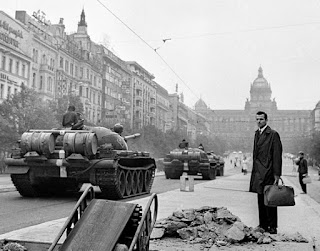 As a kid, we heard the stories of Cuban political prisoners. Our family dinner table was a classroom with my parents telling us about communism or reading the latest letter from Cuba.

I grew up admiring the men and women who risked their lives to fight for freedom. Some of these men were Cardinal Mindszenty of Hungary, those who tried to cross the Berlin Wall, the guerrillas who fought Castro in The Escambray Mountains and those who tried reforms inside the Soviet bloc.

It was a pop hit in the US. It was reality in the streets of Prague:

“On August 21, 1968, more than 200,000 troops of the Warsaw Pact crossed into Czechoslovakia in response to democratic and free market reforms being instituted by Czech Communist Party General Secretary Alexander Dubcek. Negotiations between Dubcek and Soviet bloc leaders failed to convince the Czech leader to back away from his reformist platform. The military intervention on August 21 indicated that the Soviets believed that Dubcek was going too far and needed to be restrained. On August 22, thousands of Czechs gathered in central Prague to protest the Soviet action and demand the withdrawal of foreign troops. Although it was designed to be a peaceful protest, violence often flared and several protesters were killed on August 22 and in the days to come.”

1 thought on “The week Soviet tanks crushed the Prague Spring”