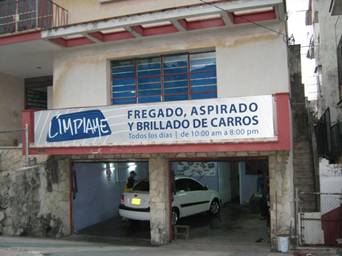 In spite of negative propaganda from the official media, a large segment of the population, especially young people, have imagined some sort of eventual return to capitalism, the only system that allows one to dream.

Twenty years ago, when they first started issuing the first licenses for small private businesses on a restricted basis, these dreams took some effort. Small home-based restaurants, known as paladares, led the way along with homes and bedrooms rented out to tourists as well as old cars made before 1959 which served as taxis. Only the strongest of these survived due to, among other things, the large number of restrictions they had to sort through as well as all the various pressures they had to endure.

Since then the country has seen a proliferation in the number of small private businesses with an ever-increasing thematic focus. They include paladares, sweetshops, daycare centers, carwash and auto detailing shops, gymnasia, hair salons, barber shops, copy shops, small boutiques, party and wedding planning services, formal wear rental, 3D movie theaters and even the occasional spa, to name but a few. All of these are in the service sector; none are in manufacturing.

Now, what has been the common denominator hindering the development of all these initiatives? It is first and foremost the absence of wholesale markets and the dearth of laws authorizing the importation of consumable goods to help create the proper infrastructure for the establishment and expansion of these businesses. Another significant issue is demand, which in the case of paladares is far below the level of supply. This is not the case, however, when it comes to the well-known timbiriches, or street vendors, who swarm through the streets offering sparse light snacks, some of questionable hygiene, at a relatively low cost commensurate with the salaries and pensions we receive.

On the other hand, the best placed businesses exist where strong investment is seen. They are, mostly, supported by start up capital, which can be provided by FE (family in the “exterior”), the foreign investment union or the children of some high directors who possess the best residences in this country, due in part to the relations of their progenitors, and a lot of money “saved” during this half century of their families in power.

Now appears a not so new method: cooperatives of a new kind (services, artisans and others), where they group together to offer their services or sell their products. But first of all, they almost always suffer from the lack of products, so it is the client who must bring them to be able to receive the benefits. This is the case of the old garage at Mayia Rodriguez and Santa Catalina Streets, which is now called “New Cooperative,” a better name for a hardware store and not for an establishment of this type, without respect to that other more appropriate, by which it was always known.

In this case the client must bring the wax, the lubricants, etc., even the detergent.

Anyway, to my view, more than a solution this is entertainment and a way that the government has to gain time, because they are not deep measures that can change or restructure the now exhausted economy of our country.  So let’s keep “Playing” at this savage capitalism, since from an optimistic perspective, we can assimilate it as a necessary entertainment for a not so distant future.