Capitol Hill Cubans has been following the disturbing decision by Brazil’s leftist government to purchase slave labor from Cuba’s dictatorship by “importing” several thousands enslaved Cuban doctors. Brazilian president Dilma Rousseff and her Workers’ Party, who supposedly are all for “workers’ rights,” do so in name only since they obviously have no issue buying slaves from Cuba’s slave masters.

Brazil’s government, led by Dilma Rousseff of the Workers’ Party (Partido dos Trabalhadores, “PT“), signed an agreement this week to funnel over $280 million to the Castro regime — via the Pan-American Health Organization (PAHO) — in exchange for 4,000 doctors (deprived of their fundamental rights).

The Castro brothers will earn a 98% profit margin, per doctor, in violation on international labor norms.

This agreement has been denounced by Brazil’s physician’s union and is now being investigated by Brazil’s chief prosecutor for labor fraud.

So much for the trabalhadores. 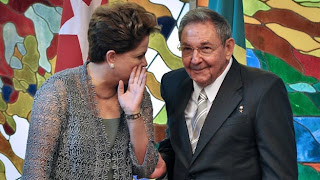 As if buying slave labor were not contemptible enough, Rousseff and Brazil have doubled down on this despicable decision and announced that any enslaved Cuban doctors who try to escape slavery and defect while in Brazil will immediately be denied asylum:

This week, Brazil announced its plan to help Cuba violate international labor law by contracting for 4,000 Cuban doctors (with absolutely no rights) at a 98% profit margin for the Castro brothers.

This contract has been denounced by Brazil’s physician’s union and is being investigated by Brazil’s chief prosecutor for labor fraud.

Today, adding insult to injury, Brazil’s Attorney General announced that any Cuban doctors that decide to defect will be denied asylum and immediately sent back to the island.

This is obviously a warning being sent by the Brazilian government — in collusion with Castro’s dictatorship — to dissuade any Cuban doctors from even thinking about defecting.

However, this in an overt violation of international refugee law.

Has Brazil’s government lost all shame?