Antunez, Cuban exiles draw strength from his visit to Tampa 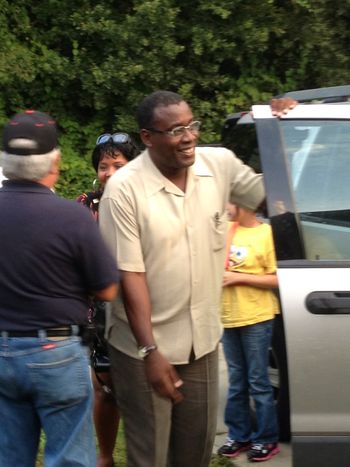 Cuban opposition activists Jorge Luis Garcia Perez, better known as Antunez, and his wife Yris Perez Aguilera undoubtedly drew strength from the Cuban exiles and other supporters they met and greeted them warmly during their visit to Tampa this weekend. When they return to Cuba next month, they will go recharged and reassured that they have the support of many in exile as they continue their struggle to free Cuba of the Castro dictatorship.

Those of us fortunate to meet the couple received a boost, as well.

Among those who greeted Antunez and Yris at a private dinner Friday evening, and a rally at Casa de Cuba on Saturday were the “old guard” of the local exile community, including several men who like Antunez, had spent years in the Castro gulag or who are veterans of 2506 Brigade abandoned at the Bay of Pigs. They have fought on the front lines against the Castro regime and after more than 50 years, they still have not been able to return to their patria, to their homeland.