A search of Cuba-related news early this morning revealed no less than 60 news stories in the past 24 hours on yet another attempt by American swimmer Diana Nyad to swim from Cuba to Key West. Apparently, Nyad’s capriciously insensitive obsession to conquer the Florida Straits, which is the virtual burial ground for untold thousands of Cubans who perished attempting to escape tyranny, is what the news media considers newsworthy when reporting on Cuba.

The major news agencies, most of which have bureaus in Havana, have been all over this “story,” but have ignored virtually everything else going on in Cuba. You will not find a Reuters story on the two attempted assassination attempts on an opposition leader in Cuba this past weekend. You will not find an AP story on this past Sunday’s wave of repression on the Ladies in White and dissidents on the island who were simply trying to attend church services. Instead, we are bombarded by news stories about Diana Nyad and her breathtaking attempt to endure jellyfish stings and avoid shark attacks while swimming to Key West.

The foreign news bureaus in Havana have spent all day concerned about British swimmer Diana Nyad and her fifth attempt at swimming across the Florida Straits.

Sighs of relief could be sensed through the news bureaus when her personal physician wrote on Facebook, “she’s doing very well.”

Yet, not a word about the 18 Ladies in White who were arrested today in the Matanzas province for trying to march peacefully after Mass.

Not a word about the 10 male activists, including three former political prisoners from the “Black Spring” of 2003, who were violently placed in choke-holds, dragged away and arrested.

Not  word about Elizabeth Pacheco Lamas, a member of the Ladies in White in Cardenas, who was chased by a regime mob wielding knives.

Not a word about the arrested Ladies in White being rubbed with cotton swabs by the secret police, so the regime can use the scent for the dogs in the future.

Not a word about the two attempts against the life of democracy leader Sara Marta Fonseca.

Sadly, these peaceful victims of the Castro regime “are not doing so well.”

However, the Havana news bureaus have expressed no concern about their well-being.

The pictures below are from the arrests this afternoon. 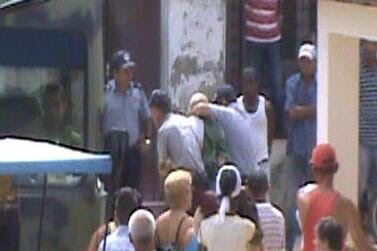