To Live in a Tenement, Without Hope 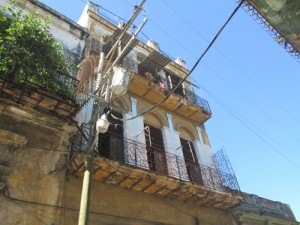 Havana , August, www.cubanet.org – Over a year ago, the Havana news channel reporter, Graciela Resquejo, tried to report the terrible living conditions, life-threatening, in which many families live in the solar — tenement — at No. 12 Jesus Maria between San Ignacio and Inquisidor, in Old Havana.

But to no avail. That report was censored by political commissars of Cuban television.

Resquejo apologized days later to neighbors and urged them to relentlessly pressure the institutions responsible for housing, so that one day they might get out of this hell.

The solar at No. 12 Jesus Maria is a disaster. Its tenants live in fear of a collapse, or the spread of disease, because when it rains, the water penetrates the roofs and walls, leading to a steady drip, even hours after the sky clears. Nor do they have drinking water, which comes through a pipe installed between sewer pipes, and rats and cockroaches swarm everywhere.

Neighbors have appealed, time and again, to the government. But the problem persists in every session of the Popular Power. Finally they went to the Department of Citizens Support of the Central Committee of the Communist Party, who toss the ball back to the municipality.

One of the biggest frustrations of tenants, was in 2007, when they were assigned to some old offices in a four-story building near the tenement. They only had to wait until the bathrooms and kitchens were put in. But while waiting for the arrangements, the government itself gave these offices to other victims who had lost their homes because of a cyclone. Back to square one.

Year after year, this miserable citadel of San Ignacio Street waits for the fulfillment of the promises of the authorities. But promises are always empty .

One of the neighbors of the tenement, whose husband recently had a heart operation, said, “The authorities remember us every time a hurricane comes,” adding, “their cynicism knows no bounds, at times we’ve been asked to find our own shelters, on others they’ve taken us to a multipurpose room at Avenida del Puerto, and as soon as the weather improves, we returned to our citadel, ignoring the building collapses that happen when the sun comes out.”

A young woman who works as a waitress at the pizzeria at 264 Prado and who has lived in the tenement for seventeen years said, “We are not asking for a palace in Miramar or Vedado, we want at least a roof with better conditions, but we are always victims of deceit and manipulation.”

The nine families the No 12 Jesús María tenement, living without hope, victims of government neglect.