The Castro regime has called on the U.N. Security Council to prevent the U.S. from launching a punitive military strike against Syria’s Assad regime for its illegal use of chemical weapons.

According to a statement from Cuba’s Ministry of Foreign Affairs, a U.S. military strike against Assad’s regime would be against international law.

Ironically, this comes from a regime that recently got caught smuggling weapons to U.N. Security Council-sanctioned North Korea — a blatant violation of international law.

Moreover, the Castro regime makes no mention of Assad’s use of chemical weapons, which is a vile violation of international law.

Then again, the Castros are no strangers to the use of chemical weapons themselves.

And, of course, the Castros include their usual rhetoric that a U.S. military strike would be against the “sovereignty, independence and self-determination” of the Syrian people.

And what about the universal right of their people not to be imprisoned, tortured and slaughtered (not to mention, gassed)?

Guess it shouldn’t come as a surprise to see these “two-bit dictators” (as Secretary Kerry correctly referred to Assad) stick together. 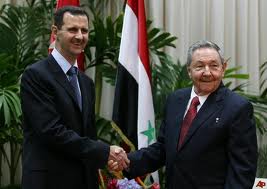