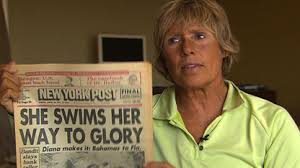 Reading about Diana Nyad’s marathon swim made me think of the event in the context, not of celebration, but of its tragic irony. To be sure, Nyad’s swim was epic indeed, and her 35 years worth of perseverance was equally admirable. I was also impressed by the hundreds of people that assisted her during her 100-mile swim: support boats, kayakers, shark-scouting divers, and a box-jellyfish expert from Hawaii. An impressive feat indeed, and one that wasn’t official until she reached U.S. soil under her own power, which she did so to the cheers of many that gathered around her on Smathers Beach.

It was in the context of this that I thought of those who, over the same 35 years, had taken a similar leap into the Florida Straits. Those that I was thinking about, however, were not jumping into shark-infested waters to break a world record. Those that came to mind were risking their lives in search of the very simple freedoms many of us take for granted. Those poor souls were not given Nyad’s celebratory send-off by compliant government officials; nor were they accompanied on their journey by an army of friends, scientists and protein drinks. Instead, they leapt into the sea, more than likely, at night, on rickety, homemade vessels cobbled together from the material remnants of a failed system. Yet like Nyad, some of those that were fortunate enough to survive the currents, jellyfish, and sharks, (and there are untold many that haven’t) had to also walk onto a U.S. beach in order for their ordeal to be made equally “official”.

And when some on this side of the Straits took to the air in unarmed Cessnas to try and help their crossing, Cuban fighter jets blew the good Samaritans out of the sky. So as the world celebrated Nyad’s achievement, I thought of those for whom the same passage represented a much more profound journey from one beach to another.