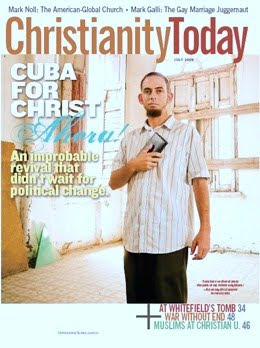 Reverend Lleonart is accompanied by his wife, Yoaxis Marcheco Suarez, who is also a prominent blogger, and former prisoner of conscience, Reverend Omar Gude Perez.

This is linked to an overall increase in violations of human rights and government attacks on independent civil society leaders.

A CSW report published earlier this year showed a dramatic spike in documented religious freedom violations over the previous fifteen month period. According to the delegation, this trend has continued during 2013.

Reverend Lleonart, who is affiliated with the Cuban Western Baptist Convention, leads a Baptist church in the village of Taguayabon in Villa Clara Province. He also teaches at the seminary linked to the La Trinidad Baptist Church, in the provincial capital of Santa Clara.

He created the blog Cubano Confesante in 2010, and has written extensively about violations of religious freedom in Cuba. His wife, Yoaxis Marcheco, is also a frequent contributor. Reverend Lleonart’s role in offering pastoral support to high profile dissidents, including Sakharov Prize winner, Guillermo Fariñas, has made him a regular target of government harassment, including arbitrary detention. The Western Baptist Convention has endorsed the visit of Reverend Lleonart to Washington, DC.

The third member of the delegation, Reverend Omar Gude Perez, received asylum in the United States (US) along with his family in early 2013. Reverend Gude is a national leader of the Apostolic Movement, a fast growing religious group which has been the target of an intense government crackdown.

The government has denied the group’s attempts to register and its members have been subjected to harassment including arbitrary detention, loss of employment and fines. Reverend Gude was imprisoned on trumped up charges in 2008 and handed a 6 and a half year sentence.