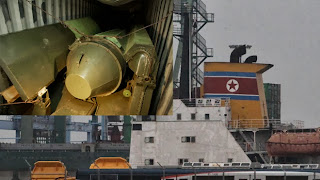 Opening Statement of Chairman Matt Salmon (R-AZ) at today’s Subcommittee on the Western Hemisphere hearing, “A Closer Look at Cuba and its Recent History of Proliferation“:

Earlier this summer, on July 16th, the Panamanian government discovered and detained the North Korean flagged Chong Chon Gang cargo vessel traveling from Cuba. Found on board were 25 cargo containers of Cuban weapons and other U.N.-sanctioned items bound for the rogue regime in North Korea. In anticipation of the U.N. Security Council Sanctions Committee’s impending report on the incident, I’ve convened our Subcommittee today to investigate further Cuba’s recent history of military proliferation and non-compliance with U.N. sanctions, and to review the options available to the Subcommittee to attempt to hold Cuba accountable for their violations.

The facts in this case are not in dispute. At the time of their discovery, the Cuban foreign ministry said that the tanker was carrying 10,000 tons of sugar and 240 metric tons of “obsolete defensive weapons” including disassembled missiles, two MiG-21 jet fighters, and two disassembled antiaircraft missile complexes, “to be repaired and returned to Cuba.” But here is what the Panamanian officials actually found hidden among the bags of Cuban sugar: night vision equipment, small arms and light-weapons ammunition, rocket-propelled grenades and artillery ammunition for anti-tank guns. This cargo is a clear violation of the U.N. sanctions imposed on North Korea after its series of nuclear-bomb tests.

This is a potentially groundbreaking case where a country in the Western Hemisphere is likely to be found in violation of U.N. Security Council sanctions on weapons proliferation. Many experts believe, and the Castro regime itself has actually admitted to the violation of international sanctions in this case. I am convinced that this case should and would be getting a lot more international attention if not for the daily and deadly news coming out of Syria, and now the heinous Al-Shabaab acts of terrorism at the mall in Nairobi, Kenya.

The evidence and testimony provided today make clear that contrary to both the North Korean shipping declaration and Cuban government statements the shipment was without a doubt a violation of United Nations sanctions on North Korea. Following the seizure, Cuban authorities released a statement claiming that the ship was transporting “two anti-aircraft missile complexes… nine missiles in parts and spares, two Mig-21 jet aircraft and 15 motors for this type of airplane… to be repaired and returned to Cuba.”

The statement was misleading to say the least; the ship was also transporting a variety of small arms and light weapons (SALW) ammunition and conventional artillery ammunition for anti-tank guns and howitzer artillery as well as generators, batteries and night vision equipment, among other items.

The various rocket-propelled grenades (RPGs) and conventional artillery ammunition, many in mint condition, were unused and much of it was in original packing cases. They clearly were not “to be repaired and returned to Cuba.” Rather, these items were intended simply for delivery to North Korea for its own use.