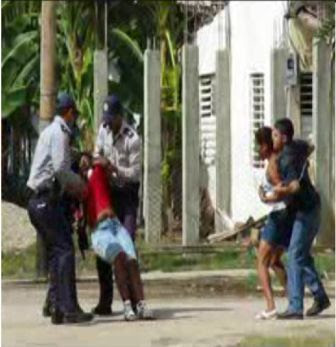 The Miami Herald has coverage of the record number of politically motivated arrests that took place in Cuba this past month:

Report: More than 700 short-term detentions of dissidents in September

A Cuban human rights group Wednesday reported more than 700 short-term detentions of dissidents in September, the third highest monthly total in four years and one without a specific explanation, such as the crackdown during a papal visit last year.

The spike was accompanied by increases in beatings, mob “acts of repudiation” and other forms of harassments of dissidents, according to the report by the Cuban Committee for Human Rights and National Reconciliation (CCHRNR).

Short-term detentions for political motives had been declining this year, after complaints by Cuban, U.N. and other international human rights organizations that the numbers had hit record levels under ruler Raúl Castro.

Sanchez reported in August that instead of jailing dissidents for short periods — usually to harass or intimidate them or keep them from attending opposition gatherings — security agents were increasingly hauling them to remote spots and dumping them there.

But the September total of 708 short-term arrests was the third highest since the beginning of 2010. CCHRNR reported 1,158 in March 2012, during Pope Benedict XVI’s visit, and 796 in December 2011, during a crackdown tied to international human rights day on Dec.10.