In last week’s Washington Post, Canadian Professor Stephen Kimber wrote an oped defending five Cuban spies, part of a broader and complex espionage network known as the Red Avispa (“Wasp Network”), who were duly convicted by a federal jury for their illegal activities against the United States.

We commend The Washington Post for allowing Prof. Kimber to present his defense, which stands in stark contrast to the five Cuban spies’ bosses in Havana, who punish diverging opinions with torture, imprisonment and potentially even death, as famed Castro regime critic Oswaldo Paya may have recently been a victim of.

Perhaps for his next act, Prof. Kimber will defend the countless innocent Cubans who have been victims of the Castro regime’s arbitrary and subjugated judiciary, with the same zeal as he defends these five convicted Cuban spies who were granted complete due process by our independent judiciary.

For example, Prof. Kimber absurdly claims the so-called Cuban Five are venerated on the island as “national heroes.” As he is surely aware, Cuba is a totalitarian dictatorship, where all means of communication are controlled by the Castro brothers. Thus, if the Cuban Five constantly appear on national television and billboards across the country, it’s not because they are venerated by the Cuban people — it’s because the dictatorship compels it.

Prof. Kimber also seeks to justify the Cuban Five’s penetration of U.S. military bases, including the U.S. Southern and Central Command and Ft. Bragg, by claiming  the Castro regime was somehow legitimately concerned about a U.S. invasion.  The Castro brothers didn’t need such information from these spies, for it had been fully aware that the U.S. had no intention of invading Cuba, courtesy of its well-placed spies in the most senior levels of the Pentagon and the State Department — namely Ana Belen Montes and Kendall and Gwendolyn Myers, who are all currently serving long prison terms.  Based on Prof. Kimber’s rationale, where Montes and the Myers’ convictions unmerited also?

And what about the eight other members of the Wasp Network, who cooperated with the U.S. authorities, received light sentences and were even permitted to stay here and live in freedom.  Were they treated unfairly?

Prof. Kimber then argues that the Cuban Five could not have been tried by a “reasonable jury” in Miami, home to so many Cuban exiles.  Yet, he fails to mention that not a single Cuban exile served on the juries that convicted the Cuban Five.

Throughout his defense, Prof. Kimber alludes to a host of alleged plots supposedly uncovered by Cuban agents.  It’s worth noting that his source is the Castro dictatorship itself, which began lying since before it even took power in 1959, with the promise of free elections, and continues lying to this day, as was documented by this summer’s attempt to smuggle Cuban heavy weaponry to North Korea hidden under 10,000 pounds of sugar.  Moreover, the Cuban regime itself remains a U.S.-designated “state-sponsor of terrorism.”

Finally, to add insult to injury, Prof. Kimber unequivocally states that the ringleader of the Cuban Five, Gerardo Hernandez, was not aware of Castro regime’s 1996 plan to shoot-down two civilian Cessna planes, belonging to the humanitarian group Brothers to the Rescue, which resulted in the murder of three Americans and a U.S. resident (see below). He must be unaware of Operacion Escorpion (“Operation Scorpion”), the code-name used by Hernandez and the spy network for the operation to shoot-down the civilian planes.

During an interview last month, Edgerton Ivor Levy, one of the members of the Wasp Network who cooperated with U.S. authorities, warned about the intention and determination of the Castro regime to harm U.S. national security.

Ivor stated that, “the real objective of Cuban espionage in the United States is to penetrate and influence the various spheres of government, the military, academia, the media and social organizations.”

We hope The Washington Post gives its readers the opportunity to hear the facts that Prof. Kimber selectively omits. 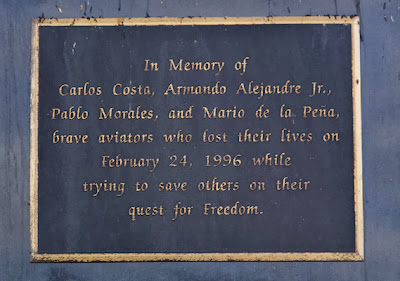