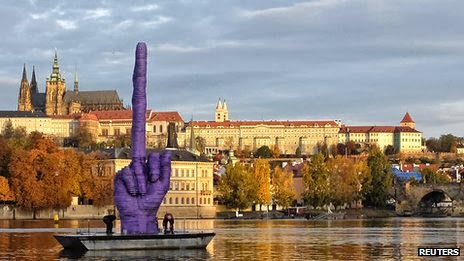 Via the Associated Press:

PRAGUE (AP) — A Czech artist known for his anti-communist stance has floated a huge statue of a hand making an obscene gesture on Prague’s main river, days before parliamentary elections that could give the communists a taste of power almost a quarter-century after they were ousted.

David Cerny’s giant purple hand, extending an oversized middle finger, was placed on a pontoon on the Vltava river Monday, near the famed Charles Bridge and visible from Prague Castle, the seat of the presidency.

President Milos Zeman supports a plan by the leftist Social Democrats to form a minority government after the vote with tacit support from the maverick Communist Party.

It would be for the first time since the 1989 anti-Communist Velvet Revolution that the party would get power, at least indirectly.