By Lilianne Ruiz in Translating Cuba:

Havana, Cuba, October 2013, www.cubanet.org – Humberto Real Suarez is another of the men who disembarked on the night of 15 October 1994 on the coasts of Caibarien, along with Armado Sosa Fortuny.

Today he is serving a sentence of 30 years imprisonment in “Kilo 8? maximum security prison in Camagüey.

The group of seven men, under the command of Sosa Fortuny, had sailed from Tavernier, Florida. They belonged to the Democratic National Unity Party (PUND), but they had received minimal military training, barely knew each other, and they were inferior in number and materiel to the army they intended to fight when they got to the Island.

It’s been 19 years since the night when an accidental shot from Real Suárez’s rifle cost the life of a man and thwarted the plans of the command to create a guerrilla front in the Escambray Mountains.

Real Suárez has never recanted his actions, but he regrets that a man is dead, so he characterizes his act as recklessness:

“I came here to fight against the government army, not to kill any civilians. The man’s death was an accident. But the reasons that made me return to Cuba, ready to engage in armed insurrection, are still valid,” he says in a telephone interview with Cubanet.

After a year and a half of psychological torture at the Villa Marista prison, he was tried in 1996 and sentenced to death. He was then 26 years old.

Independent lawyers from the Cuban Commission on Human Rights and National Reconciliation, after analyzing the prosecutor’s file, concluded that there was insufficient evidence to charge Real Suárez for the death, and issued a call to human rights organizations to intercede with the Castro government for his life.

The pressure exerted by the appeal of his parents, Graciela Suarez and Humberto Real, calling for international support to preserve his life, alongside the work of human rights organizations and the declaration of renowned intellectuals like Mario Vargas Llosa, resulted in Real Suárez not being executed. In December 2010 the initial sentence was commuted to 30 years in prison.

The document in which the sentence was given in 2010 again stated that no explosives were found among the weapons taken. That did not remove what was in the prosecution’s description of the alleged intentions — without any proof: “to carry out violent actions against schools and public facilities.”

On the other hand, several paragraphs describe the accused as anti-social elements, imitating the propaganda the Spanish government used against the mambises — at the beginning of the Ten Years War — painting them as “highwaymen” to the Cuban public. And much later — in the sixties of the last century — against the rebels fighting the Castro autocracy, calling the extermination of thousands of Cubans in the Escambray mountains, “a fight against bandits.” 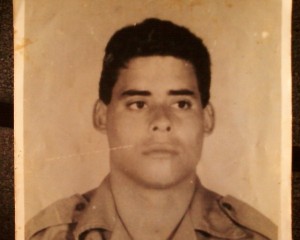 During the 16 years he was under a sentence of death, confined in an isolation cell, the only request Real Suárez made to his jailers – in all the hunger strikes he made during that period – was his right to go to the firing squad dressed in the same military clothing he was wearing when he arrived in Cuba.

When asked how how he endured for so many years a death sentence staring him in the face, Real Suárez replied that faith in God allowed him to live those 16 years without fear of execution.

Today his life is spent in a cell in the Kilo 8 prison, but shares the day with other prisoners. At 6:00 am, the guards open the gate and let him walk up and down a 40 yard corridor, until 6:00 PM. Each day, the prisoner is entitled to one hour of sunshine in the courtyard of the prison.

Recently, Humberto Real Suarez’s launched a new public petition. This time before the Archbishop of Havana, begging Cardinal Jaime Ortega to arrange the transfer of their child to a prison in the province in Matanzas, as it very difficult to travel to the province of Camagüey, given the difficult conditions of transportation in Cuba and the advanced age of both parents. Graciela Suarez and Humberto Real, have as the only purpose in life to alleviate the prison hardships of their son, through family visits that have been held during these 19 years.

Humberto Real’s father, also interviewed Cubanet, related that when he saw his son for the first time after the 1996 trial, he only managed to say, “Here is your father.” Graciela, the mother, says she has never been able to sleep a full night.

Justice in Cuba looks after its own interests

The speech that served as an ideological alibi to the court that convicted Real Suárez – in 1996 and 2010 – is a discourse of extreme violence, exemplified in the slogan “Socialism or Death,” among others.

On July 13, 1994 (the same year of the failed landing), 41 people, some of them children, died at sea as a result of the deliberate sinking of the tugboat “13th of March.” The responsibility for these deaths was never acknowledged by the government, which instead of bringing forward those who were guilty, responded to the popular protests known as The Maleconazo (August 5, 1994) with more repression. Later they justified it, in the face of national and foreign public opinion, with uninterrupted ideological propaganda in all the mass media, a maneuver known as the Battle of Ideas.

Humberto Real Suárez and his companions were not tried with all the procedural guarantees, but none has asked for clemency. They, along with many inside and outside the island, continue to hold on to the dream of freedom and human rights for all Cubans.