By Luis Felipe Rojas in Crossing the Barbed Wire:

A Cyber Cafe in Cuba? No chance. 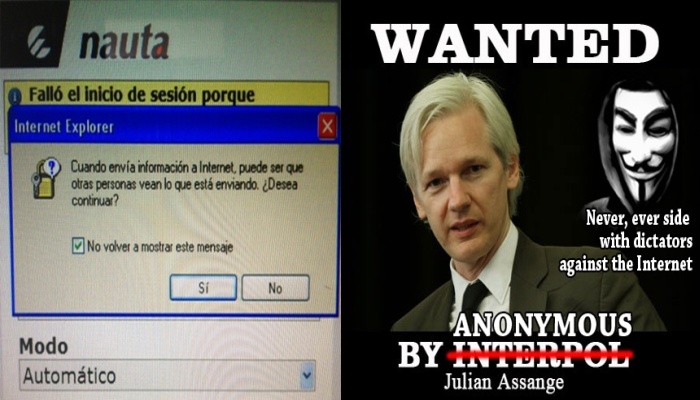 Under the heading “Protect Internet Cafes in Cuba. Julian Assange Bungles It,” the website  http://www.lasingularidad.com offers good advice for Cuban citizens and digital non-conformists wanting to get around censorship restrictions.

Every time that I receive questions from activists in Cuba about the internet browser rooms, I never tire of repeating the phrase “Begone, Satan”, “Good riddance”, “Take them winter wind”, or any other interjection I can think of at that moment to make it clear that they should run as though from the devil himself. Like moths to a flame, they are designed to attract the unwary, who are bedazzled by its radiance.

The Cuban regime took its time designing these “booby traps” and — in what it considers a masterful sleight-of-hand — is attempting to make itself look good in the eyes of the modern world, which increasingly considers internet access to be a basic human right.

In fact, it has already reaped some rewards this week by successfully recruiting a “figure” of no less international stature than Julian Assange to proselytize politically on behalf of the Cuban regime. This is a completely surreal and incomprehensible development since, supposedly, the hacker’s code of ethics mandates fighting for free access to information.

His support for one of the world’s most repressive communist dictatorships — one known for restricting access to the free flow of ideas on the internet — is a senseless action that will very probably cause Assange to lose face in the eyes of the hackers who support him. Will Assange turn out to be one of those typical useful, misinformed fools or an opportunist looking for free vacations in the Caribbean? Whatever the answer, the betrayal of the ideals of hackers like Anonymous will not go unnoticed.