It is quite likely that neither Beyonce nor Jay-Z have ever heard of Sonia Garro or her husband Ramon Muñoz. It is also quite as likely that during their vacation in Cuba earlier this year, neither of them was the least bit interested in interrupting their fun and learning about these two imprisoned Afro-Cuban dissidents. While the American music power couple was sipping cognac, smoking Cuban cigars, and yucking it up with the apartheid Castro dictatorship, both of these Afro-Cuban dissidents were rotting in a Castro gulag and are still there to this day.

But why ruin a perfectly good vacation with such depressing news? Another cognac, please… 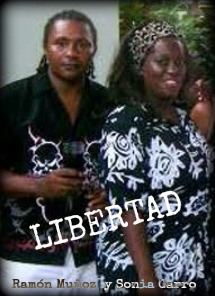 Almost 20 months after they were arrested and after numerous tortures and other abuses while in jail since, Cuban Dama De Blacno Sonia Garro Alfonso and her husband Ramón Alejandro Muñoz González will stand trial Nov. 1.

The couple was arrested March 17, 2012 ,during a crackdown preceding Pope Benedict XVI’s visit to the Cuba. Police broke into their home and fired tear gas and rubber bullets to subdue them. They, along with a second man, Eugenio Hernández Hernández, were held without formal charges being filed until this past September, when authorities indicated they would be tried for public disorder, attempted murder and other “crimes.”

They will be tried in a special state security courthouse in Havana. The proceedings will be closed to the public.

Prosecutors are seeking a 10-year sentence for Alfonso; 14 years for Muñoz; and 11 years for Hernández .