For many people in this world, Sunday is a day to enjoy the family and a day of worship. In Cuba, however, Sunday has become a day of violent repression, brutality, and arrests. For the 16th Sunday in a row, the Castro dictatorship has carried out a massive repressive operation to violently attack and arrest peaceful human rights activists on the island. Along with other dissidents, the Ladies in White, who meet every Sunday to attend church services together, have once again become victims of Castro State Security who viciously attacked and arrested several of the ladies as they attended church services at local churches.

Marc Masferrer from Uncommon Sense has the report:

Among the acts of repression reported Sunday from across Cuba was the arrest of seven Damas De Blanco, or “Ladies In White,” as they walked from a church after Mass.

Among the seven was Alejandrina Garcia de la Rivas, the wife of former Group of 75 prisoner of conscience Diosdado Gonzalez.

Less than three months ago, I was fortuante to meet Garcia during her visit to Tampa.

In her remarks to a gathering at Casa de Cuba and later in a brief private conversation, Garcia impressed with her forthrightness in her condemnations of the Castro regime. 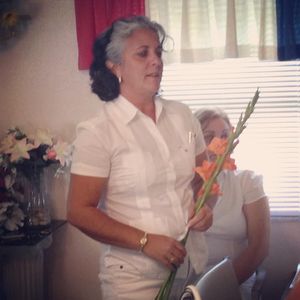 It is no surprise that she and the others decided to go to Mass, as a group, despite the obvious risks.

If you are a Cuban Damas De Blanco, or “Lady In White,” going to Sunday Mass carries with it the risk of arrest. This morning, for the 15th Sunday in a row, it happened in the city of Colon, in Matanzas province.

It also happened in the cities of Santa Clara and Cardenas. Other activists, including men, were also arrested.

Just another Sunday in Castro’s Cuba.