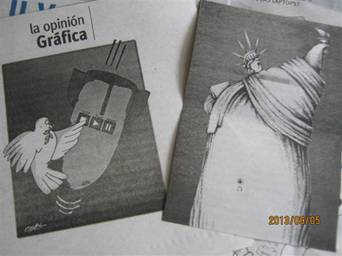 The Cuban cartoonists, who publish their cartoons and works in the official media, seem to have signed an agreement, by which eighty percent of their satirical darts are directed against the empire and its lackeys, and the other twenty are partitioned between the treatment of general topics (peace, war, hunger, climate change, etc.), that does make anyone cringe, nor cause them personal problems or complicate their existence, plus some things and cases about irrelevant administrative leaders, bureaucrats, service employees, and so on.

Never has any politician at any level been touched with so much as the petal of a rose, although they have systematically demonstrated their ineptitude and incapacity to fill the jobs they occupy. They seem to be included in some clause of untouchables, together in a signed agreement. It is often said that political satire has been and is an important part of humor because it is a thermometer of politicians’ rights and wrongs.

In Cuba it was like this until the liquidation of freedom of the press by the new regime. The Liborio character created by Roberto de la Torriente, later the Bobo (Fool) character created by Eduardo Abela, and later, in the fifties, Loquito (Wacko) by Rene de la Nuez, showed, with salt and pepper, what was going on in our national life.

Other cartoonists did the same, having among the characters in their cartoons and work all the public figures, from the president of the day down to minor figures. Then, political humor was not persecuted nor punished. To review the thousands of caricatures published during the years of the Republic, is to take an interesting and instructive tour through this part of our history, which is impossible with the most recent, where reality has been kept hidden and distorted by spurious ideological interests.

To be able to do this, we have had to turn to publishers outside of Cuba, for the magnificent Cuban comedians living abroad.

Now that some pro-government journalists have dared to respectfully request a loosening of the current secrecy, it would also be advisable for some of these humorists to ask, also respectfully of course, to be allowed to reflect, from the humor side, the sad national reality and the many responsible for it.