Instead of focusing on Castro propaganda, perhaps the U.N. should focus on the myriad of criminal acts committed by Cuba’s Castro dictatorship and the millions enslaved on that island plantation. But of course, that will never happen in the halls of the corrupt and impotent United Nations.

U.N. Should Focus on Cuba’s Violation of Multilateral Sanctions

This yearly ritual is yet another symbolic U.N. exercise in anti-Americanism, for U.S. policy towards Cuba does not fall within the jurisdiction of the U.N. General Assembly.

It falls within the legal purview of the democratically-elected U.S. Congress and Executive Branch.

Doing business with the U.S. is not a right — it’s a privilege.

Thus, it’s the sole decision of the U.S. who it decides to transact business with.

It’s ironic how some countries use the concept of “sovereignty” to excuse the behavior of some of the world’s most ruthless dictators — from Assad to Castro. Yet, they oppose the “sovereign” decision of our democracy not to engage in commerce with these ruthless dictators.

What does fall within the purview of the U.N. are the various multilateral sanctions regimes adopted by the U.N.’s Security Council.

Notable among these are the U.N.’s multilateral sanctions towards North Korea weapons proliferation.

These U.N. multilateral sanctions have been clearly and egregiously violated by the Cuban regime, which recently sought to smuggle (aboard the Chong Chon Gang freighter) an active and offensive weapons arsenal to North Korea hidden under 10,000 pounds of sugar.

Thus, once the U.N. General Assembly finishes its symbolic exercise against U.S. laws, let’s hope it focuses on enforcing the multilateral sanctions that actually fall within its jurisdiction. 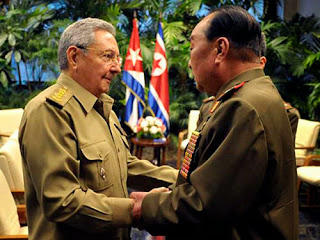 2 thoughts on “The U.N. and Cuba’s Castro dictatorship”