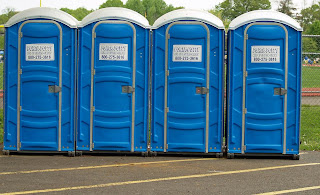 The “economic reforms” of the Castro dictatorship in Cuba are moving at a furious pace. Thanks to the magnanimity of dictator Raul Castro, leader of the repressive apartheid Castro regime, Cubans now can apply for a state license for Porta-Potties! You heard that right: Cubans are now free to rent out portable toilets at state-mandated rates. This latest announcement comes on the heels of another breakthrough and monumental economic reform announced by the Cuban dictatorship recently that it would begin issuing state licenses to entrepreneurs who engage in the business of Dumpster Diving.

At this rate of “reform,” Cuba will be a free-market democracy before you know it. Perhaps, even as soon as the end of the 21st century.

Pushing on with its effort to open its economy to market forces, the Cuban government Thursday legalized the business of renting out public bathrooms, providing fixed prices for five categories of facilities.

A pilot rent-a-toilet program, which was started in 2011 in Havana province, now has been expanded to the entire island.

It allows the rental of state-owned bathrooms to private persons who hold government licenses as “public bathroom attendants” — one of 182 categories of self employment permitted by the government.

Details of the change were contained in a seven-page resolution signed by Minister of the Economy and Planning Adel Yzquierdo Rodriguez and published in the latest edition of the Official Gazette.

The number of public bathrooms in Cuba is unknown. Most are presumed to be in cities and towns, and many are known to be in dire condition.

The price for using a toilet, urinal or washbasin will be one Cuban peso, or about four U.S. cents, according to the regulations. Prices for additional services such as “perfumes, talcum powders, cosmetics, soap, showers, among others, are set by supply and demand,” although the renters must notify the municipalities of the services they offer.

Renters must pay for the water and electricity used at residential rates and guarantee “quality, hygiene and good customer service,” the regulations added. Toilet facilities cannot be subleased or used for any other activity.

The complicated process require technicians from communal services departments of municipal governments, working with current bathroom attendants, to study the activity at each site in order to establish its potential revenue.