Just because you are a rich narco-terrorist, it doesn’t mean you cannot enjoy the finer things in life…

Lifestyles of the Rich Narco-Terrorists

Being a narco-terrorist in Cuba has its privileges.

The picture below shows the leaders of Colombia’s narco-terrorist guerrilla group, FARC, recently relaxing on a luxurious yacht off Cuba’s coasts.

They are Ivan Marquez and Jesus Santrich.

And here’s an “inside” look at Rev. Jesse Jackson’s recent visit with these narco-terrorists in Havana (from NNPA):

Jesse Jackson slid in next to [Pablo Catatumbo, a/k/a Jorge Torres Victoria, a member of FARC’s high command] and the two talked as we rode to a secluded compound less than 30 minutes from central Havana. When we arrived, the driver flicked his lights twice and two armed guards stared at the van intently as the metal gates slowly eased open to allow our passage. After riding several minutes through a neighborhood within a neighborhood, we unloaded at a large, stately house that had once belonged to the Cuban elite.

Castro’s VIP treatment of the FARC’s leaders should not come as a surprise, he’s been rolling out the red carpet for terrorist groups — including Carlos “the Jackal,” ETA, ELN, PLO, M-19, Medellin Cartel, Montoneros, Macheteros, FLN, EGP, MIR, IRA, FALN, NLF, MRTA and PFLP — for decades. 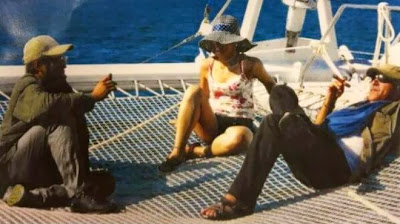