Café Fuerte reports that according to the Castro dictatorship’s own figures, nearly 1,000,000 homes in Cuba have no running water from a public source, relying instead on wells, streams, and river for their daily water needs. 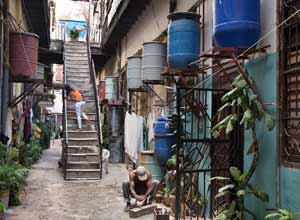 Of course, the blame for this most basic lack of plumbing cannot be placed on the Castro regime, who has ruled the island for more than five decades and controls practically every single aspect of Cuba’s economy and Cuban society. Instead, the blame must be squarely placed on the evil and inhumane “blockade” the U.S. has on the magnanimous and benevolent Castro dictatorship.

If it were not for the so-called embargo, Cubans would be enjoying the free flow of running water because everyone knows that the U.S. is the only place in the entire world where Cuba can purchase plumbing supplies.