Another installment in the Cuban dissident awareness campaign from the U.S.-Cuba Democracy PAC’s Young Leaders Group: 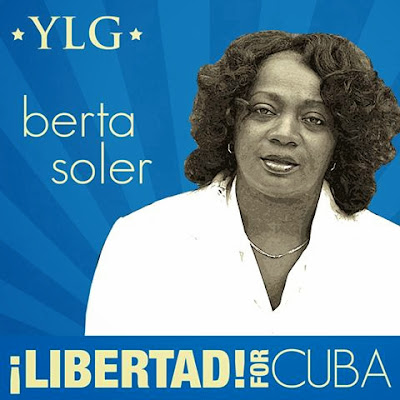 Berta Soler is a Cuban dissident and leader of the Ladies in White (Damas de Blanco), a group founded by wives and mothers of 75 political dissidents arrested in Cuba in a 2003 crackdown. In March 2012, Soler was one of the many dissidents detained in anticipation of Pope Benedict XVI’s visit to Cuba.

Soler and the Ladies in White march together on Sundays, wear white to represent peace, love and purity, and carry gladiolus flowers while zealously calling for freedom in Cuba. Despite being the victims of constant surveillance and frequent beatings by the Castro regime, the Ladies in White continue to organize peaceful protests to call for the release of all political prisoners in Cuba.

For their bravery, Soler was one of five members of the Ladies in White to be selected to receive the 2005 Sakharov Prize for Freedom of Thought, which she formally received in 2013 after years of being denied an exit visa by the Cuban Government. Recently, Soler met with President Obama and Vice President Biden and urged them to support Cuba’s democratic opposition movement.