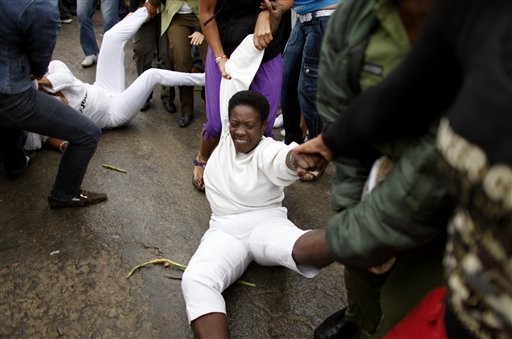 As we have mentioned here every month when independent organizations on the island release the numbers of politically motivated arrests in Cuba, this is the true measure of the Castro dictatorship’s “reforms.” While the press and “Cuba Experts” are counting the number of shoeshine stands on the streets of Old Havana, the Castro dictatorship is violently arresting dissidents and opposition leaders by the thousands in a blatant and shameless attack on human rights.

The full report for November from UNPACU:

–  November 2013 reaches a sad record of illegal detentions. It is the highest repression November in decades and the second highest monthly numbers in 20 months.

– Among all 761 detentions, also «were detected at least 192 victims of physical assaults, 119 acts of vandalism, 94 of various forms of harassment and 72 of the so-called “meetings of repudiation” were recorded» (also called “acts of repudiation”), said the Cuban Commission for human rights and national reconciliation (CCDHRN).

– In the words of the CCDHRN, «Although the growing of political repression (and also of social repression) is palpable throughout Cuba, in this last month were recorded the highest numbers of peaceful opponents repressed in the eastern provinces of Santiago de Cuba and Holguin, Matanzas and Villa Clara (central region) and Havana.»

– A «serious and worrying police crime case took place in Colón, Matanzas province, on 8 November, in the morning, when several agents of the Ministry of the Interior, clothed as civilians, fired numerous shots against the citizen José LUIS ZUMAGUERA MIRANDA, 45 years old, who received seven shots in his body when fleeing his home where the police went to arrest him on suspicion, according to reports, that had stolen a bicycle. Zumaguera saved his life miraculously».

– Given that December 10 is the World’s Human Rights Day, it is expected that December pulverize or al least settle these negative records of repression.

– Official original paper released today by the CCDHRN (Cuban Commission for Human Rights and National Reconciliation), the only Cuban Human Rights organization Member of the International Federation of Human Rights (FIDH) is linked to download: