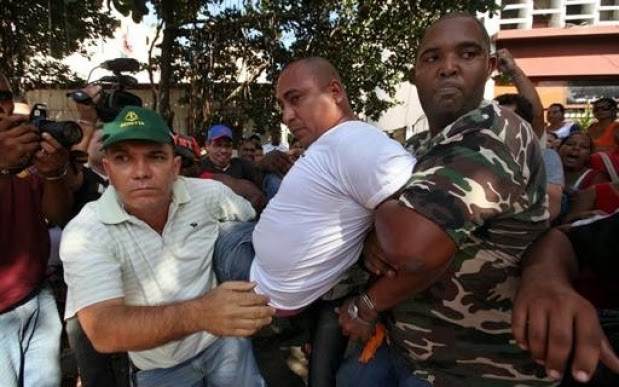 2013 has been a busy year for the apartheid dictatorship of the Castro family in Cuba.

Via the Institute for War & Peace Reporting:

Activists note slight but insignificant dip in numbers compared with 2012.

A leading Cuban human rights group says it recorded 5,301 politically-motivated arrests in the first 11 months of this year, a slight fall on 2012 which local commentators say does not reflect a positive trend.

The independent Cuban Commission for Human Rights and National Reconciliation (CCDHRN) said the January-November figure was 734 down on the same period last year.

More significant than this drop is the flattening out of the numbers. According to CCDHRN, between 2010 and 2012 the number of detentions doubled every year.

One reason why the number of detentions runs into the thousands is the authorities’ tactic of using repeated short-term internment as well as longer jail terms to harass dissidents, rights activists and independent journalists.

The government detains human rights defenders when they hold demonstrations or mark some significant anniversary of which it does not approve, as well as independent journalists who document human rights violations. It responds similarly to verbal or written criticism. This year, this included the For Another Cuba campaign calling for a public debate on issues like wages, emigration restrictions, internet access and currency controls.

Despite the fall in the overall figure for 2013, CCDHRN said it was particularly concerned that August, September and October saw the numbers creeping up, at 547, 708 and 909 in those months.

December saw higher-than-average numbers of detentions in 2011 and 2012, which rights activists attribute to International Human Rights Day falling in that month. Juan del Pilar Goberna Hernández, who monitors detentions for CCDHRN, said he feared this would be repeated once the figures for December 2013 were collated.

Among the 120 or so civil society groups whose members feature in CCDHRN’s monthly reports, Damas de Blanco (Ladies in White), the Committee for Assisting Political Prisoners and Families, the Hard Line and Boycott Front, and the Opposition Movement for New Republic were prominent. Others included the Patriotic Union of Cuba, based in Santiago de Cuba, the Central Opposition Coalition and the Rosa Parks Feminist Movement for Civil Rights in Cienfuegos, the Democratic Alliance of Pinar del Río, the Pro-Human Rights Party also in Pinar del Río, and the November 30 Party in Ciego de Ávila.

CCHDRN chairman Elizardo Sánchez Santa Cruz said that the greatest challenge facing human rights observers was how to distinguish between real abuses and the misinformation spread by undercover police officers.

He said that on one occasion, infiltrators reported the detention in Cuba of Fernando Botero Angulo, a leading sculptor in Colombia.

Goberna Hernández said that in order to counter such attempts to sow confusion, CCHDRN tries to corroborate reported abuses with reliable sources, and does not document them if they cannot be verified.

Despite these challenges, CCHDRN believes it covers most cases, especially detentions, although Elizardo Sánchez says the true numbers must inevitably be higher.

Camilo Ganga is the pseudonym of a journalist living in Havana.