You cannot have a tyranny if you have a free press. Cuba’s Castro dictatorship has drilled this into their puppet dictator in Ecuador, Rafael Correa, and thanks to his Cuban Communist training, he has destroyed the free press in that country. However, Correa now thinks he can intimidate the press into silence in the U.S. as well.

All we can tell you, Rafael, is put on your best party dress and let’s dance…

Via the Washington Free Beacon: 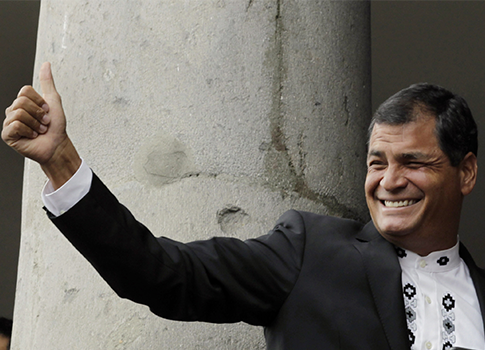 Ecuadorian president Rafael Correa lashed out at the Washington Free Beacon over the weekend, accusing it of being in hock to oil company Chevron, which is engaged in a legal battle involving alleged environmental damage in the South American nation.

“Con cariño para @FreeBeacon” – with love, for the Free Beacon – Correa wrote on his official Twitter account. He included a picture that called the Free Beacon “corrupt” and wished readers a Merry Christmas and Happy New Year.

The president was responding to an article that detailed the government’s ties to the Spanish anti-piracy firm Ares Rights that has allegedly abused intellectual property protections on YouTube in an attempt to remove Chevron’s videos criticizing the government’s role in an $18 billion civil judgment against the company.

A state-run media organ also attacked the Free Beacon, accusing it of “lying” about Ecuador and President Correa. It did not dispute any of the article’s actual reporting, though it did brag about the number of retweets of Correa’s initial salvo.

“The Washington Free Beacon is attempting to misinform the international community about the trial,” wrote Edison Flores, a writer for the government press organ El Ciudadano, or The Citizen.

The Free Beacon story detailed the ties between Ares Rights and the Ecuadorian government and noted allegations by Chevron and legal blogger Adam Steinbaugh that the company’s copyright infringement claims were naked attempts to suppress communications critical of the government.

The Correa administration has worked extensively with plaintiffs in the Chevron trial, who are seeking to enforce the judgment against the company in Canada, Brazil, and Australia, where, unlike Ecuador, the company has assets.

Chevron has long alleged that the Ecuadorian judgment was attained by fraud and has filed a racketeering lawsuit against a number of the plaintiffs’ attorneys in American court.

The company has extensively documented evidence of fraud on the plaintiffs’ part on its website, the Amazon Post, and in YouTube videos. Ares Rights targeted the latter and succeeded in getting a number of videos removed. They were later reinstated.

Chevron has targeted Correa individually, calling him “something just north of a corrupt political thug.”