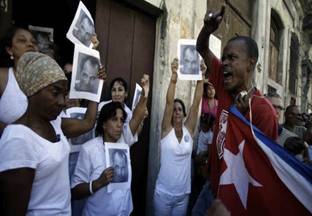 During 2013, despite delivering appeasing speeches in international forums, primarily for foreign consumption, Cuban authorities maintained and increased the repression against peaceful opponents, in most cases culminating with the use of physical violence by their agents and employees.

All indications are that this will continue and possibly worsen in 2014. Those who exercise absolute power for too long consider themselves above the law, and act according to their personal interests and not in the national interest. So they denigrate and persecute those who do not share their views and have the courage to speak out. They organize rowdy concerts in front of opponents’ homes. They use school children, without their parents’ permission, for acts of repudiation where profanity and physical attacks are common. Law enforcement officers, rather than maintaining order, act as henchmen (in one case an official photographer, caught up in the surrounding frenzy, began kicking a dissenter). In the same way they insult and assault the Ladies in White. In the provinces the situation is even worse, where they exploit the information isolation that exists there, where everything remains between the Party, the People’s Power, and State Security.

The authorities, making a mistake once again, have made a very bad bet, choosing the worst way to try to quell the increasing rebellion of responsible Cubans who have lost their fear. What this does is unite them in opposition. If they would listen to the clamor of the people who, disgusted by ineffective political clashes, demand real solutions to their problems without so many absurd delays, and would hear the different opinions of those who just want the best for Cuba, all could be improved in a civilized and participatory environment.

But as they perpetuate the dogmas and the orthodoxy, and continue defending at all costs the failed ideas that have brought us only pain and misery, they conspire against the peaceful settlement of the profound national crisis.

Translated by Tomás A.