Our friends at Capitol Hill Cubans once again, for the umpteenth time, debunk the widely circulated myth that Cuban Americans are flocking to the Democrat party and its more often than not, pro-Castro dictatorship candidates. As CHC clearly and concisely points out, the Cuban American vote is not about exclusively supporting Republicans or Democrats, but as it has always been and continues to be to this day, about voting for candidates who have a strong stance for liberty and freedom in Cuba and who are against the tyranny of the apartheid Castro dictatorship.

The media and “Cuba Experts” can continue to repeat this myth over and over again and trot out a myriad of flawed and skewed polls, but for all their propaganda, they can neither change the facts nor the actual reality of the Cuban American vote.

We all know that — for whatever reason — the Associated Press (AP) dislikes U.S. policy toward Cuba.

In Havana, it constantly whitewashes the Castro dictatorship’s repression, lauds its leaders, exaggerates its “reforms” and scorns its dissidents.

In Washington, it went as far as reprimanding a State Department spokesperson over Cuba policy.  That’s journalism?

And now, in Miami, it deceptively seeks to make Cuba policy about partisan politics.

Thus, in the latest variant of the old theory (dates back to The New York Times in 1965) that the Cuban-American community’s attitudes toward Cuba policy are changing, the AP tries to present the 2012 election of U.S. Rep. Joe Garcia (D-FL) as its gauge.

In an article today, the AP theorizes:

“For more than two decades, running for Congress in this sun-soaked capital of Cuban exiles has required two things: a Republican registration card and a hard line toward the Castro regime.

So when Joe Garcia became the first Cuban-American Democrat from the state to win election to the House in 2012, it signaled a crack in a critical GOP constituency.”

First, Cuba policy is not — nor has been — about partisan politics in the Cuban-American community.

Cuban-American majorities have elected Cuban-American Democrats on many occasions, from Alex Penelas and Kathy Fernandez-Rundle in Miami-Dade County to Bob Menendez and Albio Sires in New Jersey.

Cuban-American majorities have also voted for non-Cuban Democrats on many occasions, from Bob Graham to Bill Nelson.

All of these Democrats have been strong supporters of U.S. policy toward Cuba.

In contrast, Joe Garcia was not elected to represent Florida’s 26th Congressional District (CD) with a majority of the Cuban-American vote.

Here are some facts the AP ignored in its story:

Unlike the CDs represented by U.S. Reps. Ileana Ros-Lehtinen (R-FL) and Mario Diaz-Balart (R-FL), Garcia’s CD is not a majority Cuban-American CD.

Actually, Garcia’s CD is barely even a majority Hispanic CD. Florida’s 26th CD is just over 55% Hispanic — period — of which Cuban-Americans are a fraction.

Despite running against a flawed candidate in 2012, Garcia did not receive the support of a majority of Cuban-Americans in Florida’s 26th CD.

As such, Garcia’s election in not a good gauge — by any measure — of Cuban-American policy attitudes.

And even more so when Garcia — to his credit — has publicly and privately stated his support for the Cuban embargo and tourism travel ban.

(The AP did bury this last fact at the end of its story).

However, Garcia does support the Obama Administration’s policy nuances regarding unlimited Cuban-American travel and “people-to-people” travel.

We oppose these policy nuances, particularly the “people-to-people” trips, whereby U.S. travelers go on Castro-hosted tours of the island and all stay at the repressive Cuban military’s tourism complexes.

It’s safe to say that Garcia’s Cuban-American constituents also have strong reservations regarding these policy nuances, which is why he has yet to be able to garner a majority of the Cuban-American vote.

However, such disagreements, which will continue to be hashed out, have nothing to do with partisan politics.

Let’s keep it that way. 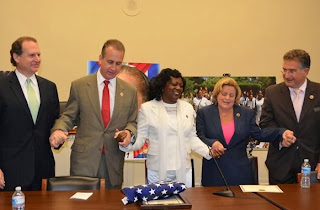