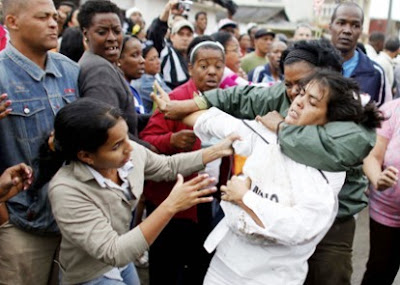 Cuba’s dictatorial government ended 2013 with a veritable bang as the apartheid dictatorship of the Castro family amassed 853 political arrests in the month of December, the highest monthly total in the entire year. The concerted wave of repression carried out by the Castro regime in the last month helped to boost the number of dissident arrests in 2013 to a whopping 5,718, a new yearly record since 2010.

Keep in mind that throughout this massive wave of violent repression washing over the island of Cuba in 2013, the international media has been busy reporting on the “reforms” of the Castro dictatorship and the regime’s supposed move away from totalitarian rule.

December was banner month for political repression in Cuba

December was a banner month for political repression in Cuba, with the Hablemos Press (CIHPRESS) news agency and human rights monitor this week reporting 853 political arrests. That was the highest monthly total reported in 2013 and enough to raise the annual count to 5,718, the most recorded since CIHPRESS began keeping track in 2010.

I guess Cubans are lucky dictator Raul “The Grinch” Castro is a “reformer,” or conditions might really be intolerable on the island.

Of the arrests reported in December, more than 350 occurred on a single day, Dec. 10, or International Human Rights Day.

For details on each arrest recorded by CIHPRESS in Decmber, read the group’s report here.