An interesting piece by Mark Wallace in The Guardian:

Cuba’s classic cars are icons of oppression that deserve scrapping 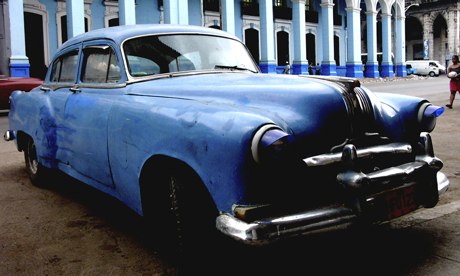 Most western travellers visiting Cuba will have come across the island’s cars long before their plane lands. They appear in every travel guide, and you can buy calendars and posters of the 1950s classics that still drive through the streets of Havana.

They’ve become an icon of the island – considered a quaint, unmissable feature of Cuba’s unique atmosphere. So, it was against a background of nostalgia that the news broke that they may at last be retired. It was portrayed almost as a saddening shame that these majestic beasts of the road might disappear.

This is patronising nonsense. As the experience of the rest of the world shows, if Cubans had the choice they would have abandoned their clapped-out Studebakers and Oldsmobiles long ago. The only reason they didn’t is that the communist dictatorship that rules them did not allow it.

In a classic example of some being more equal than others, only senior party officials and a smattering of celebrities deemed of use to the party have been allowed to buy new vehicles from abroad over the past 60 years.

The motor museum driving Cuba’s roads each day might seem quaint to tourists, who can go back to their air-conditioned, reliable and safe modern cars when their holiday is over – in reality the sight is a symptom of the way in which dictatorship runs down the lives of those forced to labour beneath it.

The tourist attitude is a form of rubbernecking at misfortune, of the type that has commonly become unacceptable in decent society. While our Victorian ancestors thought it quaint to set up villages of what they considered to be primitive Africans at shows in Britain, today we rightly act to end the misery of poverty instead of gawping at it. Somehow Cuba has managed to escape that trend. While Iran and North Korea are seen for what they really are, the last outpost of dictatorship in the Americas is let off lightly, all Buena Vista Social Club tracks, mojitos and sun-soaked beaches.