While the independent Cuban news agency Hablemos Press released its political arrests figures recently showing a whopping 853 politically motivated arrests in Cuba this past December and over 5,700 arrests throughout 2013, the Cuban Commission on Human Rights and National Reconciliation, a human rights group on the island, just released their political arrest tally and the news is even worse. According to the report just released by the CCHR, 1,123 political arrests were documented in Cuba during the month of December and that raised the yearly total to the disturbing figure of 6,424 political arrests carried out by Cuba’s apartheid dictatorship.

Due to the ruthless totalitarian nature of Cuba’s brutal dictatorship, it is nearly impossible for dissidents and human rights activists to keep track of every single political arrest that takes place on the island. Therefore, it is quite possible these figures are higher, perhaps much higher.

But most telling of all is that the immense wave of violent repression that has washed over the entire island of Cuba, unprecedented since the Castros took power more than five decades ago, is taking place as the media and “Cuba Experts” continue to tell us the Castro regime is changing and adopting reforms.

Independent journalists have documented at least 853 political arrests in Cuba during the month of December 2013.

According to a report released by Centro de Informacion Hablemos Press (CIHPRESS), this brings the year-long total of 2013 political arrests to 5,718.

Unlike some foreign journalists, these courageous Cuban independent journalists and human rights observers have thoroughly and painstakingly documented each political arrest — at great risk.

In the four years since CIHPRESS has been producing these reports, it has documented over 16,555 political arrests in Cuba.

All under the rule of General Raul Castro.

These are only those arrests that have been thoroughly documented. Many more are suspected. 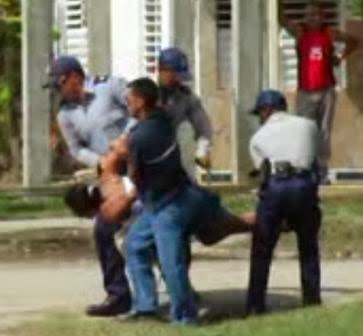