The magnanimous and marvelous “reforms” in Cuba being enacted by the apartheid Castro dictatorship continue to rack up victims.

The Council of Human Rights Rapporteurs of Cuba makes an urgent appeal to the national and international community on behalf of the life and physical integrity of ten peaceful human rights activists who live in Ciego de Avila, a city in the center of the island.

They denounce the brutal beating that they were subjected to on January 9, 2014 at 10:35 a.m. by the repressive forces of the Cuban political police when said activists were publicly disseminating among the citizens of Ciego de Avila a bulletin they publish: “Voz Avileña“.

The activists who were violently beaten and arrested were: Juan Carlos Gonzalez Leiva, whose right knee, left hand and leg, as well as his right shoulder were injured. The left side of the face and head of Gonzalez Leiva are presently swollen since both of his arms were forced behind his back by one officer while another one beat him repeatedly with his fists. All of this occurred inside a patrol car that was taking the blind activist and his wife, who also brutally beaten, to the First Police Unit in Ciego de Avila. The military personnel had to get a doctor with urgency to attend Gonzalez Leiva after he was dragged out of the patrol car and choked from behind to such a point that he lost consciousness and past out. After this violent episode, the activist is having trouble swallowing.

The wife of Gonzalez Leiva, Tania Maceda Guerra, who also belongs to the human rights movement, Ladies in White, had locks of hair pulled out, she was bitten, her arms were twisted behind her back and she was choked while held down against the floor of the patrol car. In that position she was savagely beaten by the officers.

The other human rights activists who were beaten are: Junior Ortega Ribero, president in Ciego de Ávila of the Cuban Independent and Democratic Party, Yoandi Quintana Sarría, who is deaf, is president of the Independent Association of the Deaf,  the ex-political prisoner Daniel Camacho Marchena, Fernando Santana Vega, Luís Gilberto Vila León, Ulice Cintra Suárez and Daniel Martínez and the independent journalist Alberto Plas Rico.

All ten activists belong to the Democratic Municipal Circles of Cuba and the Council of Human Rights Rapporteurs of Cuba with their national headquarters located at: calle Honorato del Castillo, # 154, E/ República y Cuba, in Ciego de Ávila.

All of the above mentioned NGOs are considered illegal by the Cuban government.

Courtesy of the Coalition of Cuban-American Women. 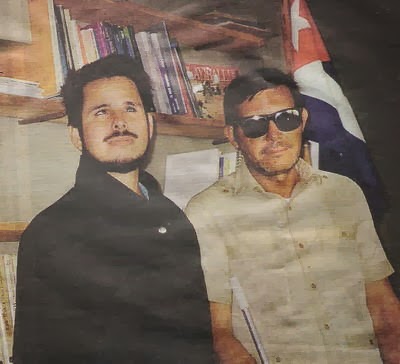