Marc Masferrer has the report at Uncommon Sense on the deteriorating condition of Cuban political prisoner Marcelino Abreu: 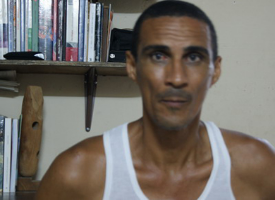 Abreu, an activist with the Patriotic Union of Cuba, or UNPACU, last month resumed a hunger strike after the Castro dictatorship reneged on a promise to release him. Just before the new year, officials transferred Abreu to a military hospital.

Via Twitter on Sunday, activist Ivan Hernandez Carillo reported that Abreu is suffering tremendous pain, apparently because of an infection caused by a contaminated catheter.

“We hold the Castro brothers’ regime responsible for his life,” UNPACU wrote on its Facebook page on Sunday.

Abreu was arrested Aug. 13, 2012 — Fidel Castro’s 86th birthday — when police caught him distributing anti-government leaflets and shouting anti-Castro slogans. (His protest was captured on this video; see the 1:50 mark.)

More than a year later, on Aug. 29, Abreu was tried, convicted and sentenced to 4 years in prison, even though Abreu wasn’t allowed to be in the courtoom. On Sept. 21, Abreu responded by starting his hunger strike.