Millions of Cubans May Lose Their Life Savings This Year 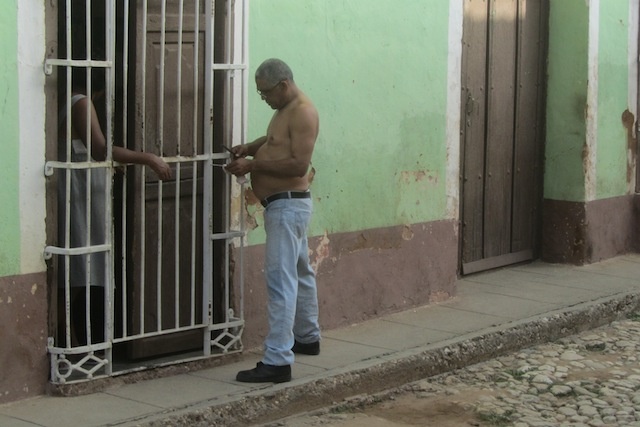 A man mutters this to me in perfect English as I walk down the once-elegant Calle 23 in downtown Havana. He is the very last customer waiting in a Kafkaesque line that wraps around the block and doubles back on itself twice. The afternoon is stiflingly hot. Two police officers are hassling a nearby teenager because he took off his T-shirt.

“But that’s why things here are so safe,” the man continues, much louder this time. I’m confused until I realize another cop is standing behind me. He wandered over after spotting a Cuban nacional talking to me—an American gusano. “Very safe, very safe. You know, because the police do such a good job!”

The officer gives him a long, hard stare, then wanders away. I take my place at the end of the line next to my new buddy, who says his name is Yaniel.

Along with several hundred other Cubans, Yaniel and I are waiting to get into Coppelia, the iconic ice cream parlor created in 1966 by order of Fidel Castro and named for his then-secretary’s favorite ballet. Located across the street from the Habana Libre hotel, a one-time Hilton from which Fidel directed the revolution for three months in 1959, Coppelia has been called the “ultimate democratic ice cream emporium.” But, as I quickly find out, that isn’t exactly true.

When the Cubans around me spot a foreign tourist standing with them in the endless queue, they’re quick to inform me that the line we’re in is for people using Cuban Pesos—which is to say, most Cubans. As a woman in curlers and a tube top explains, people holding Convertible Pesos, the country’s other currency, aren’t forced to endure such Socialist indignities. Foreigners, like me, carry Convertible Pesos.

She then points to a tiny building surrounded by a well-kept patio and leafy trees offering respite from the blistering mid-summer sun. There is no line at this Coppelia stand and, sitting in the shade are several happy, relaxed-looking people, enjoying their ice cream.

This, in a nutshell, is what having two currencies has done to the already dysfunctional Cuban economy for the past 20 years. The good news is that the government is finally attempting to fix it. The bad news is that millions of Cubans could lose their life savings in the process.