From the offices of U.S. Rep. Mario Diaz-Balart (R-FL): 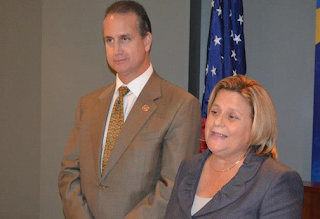 “Widespread protests across the island in places such as Bayamo, Holguin, Havana, and Camaguey resulted in harassment and arrests of many of courageous pro-democracy activists by Castro’s thugs. Renowned leaders of the pro-democracy movement, including Dr. Oscar Biscet, have been detained and threatened with violent reprisals for daring to demand essential liberties. I urge those in the international community who value human rights to stand in solidarity with the Cuban people’s struggle for freedom and demand an end to this brutal oppression,” said Congressman Diaz-Balart.

“While many leaders of the Western Hemisphere will be arriving in Cuba next week, it is appalling that the current human rights situation on the island will not be addressed nor condemned. Recent intimidation and oppression tactics against democracy leaders, such as Dr. Oscar Elias Biscet and others, has been widespread throughout Cuba as the Castro regime seeks to silence the democracy movement leading up to the upcoming CELAC conference. I urge responsible nations to stand in solidarity with the democracy leaders and condemn these human rights violations that must end immediately,” said Congresswoman Ros-Lehtinen.