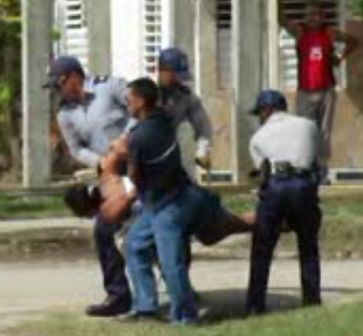 Many things happened in Cuba during the month of January, but the most disturbing  events were the 1,052 political arrests of Cuban dissidents, opposition leaders, and human rights activists. Unfortunately, if you get your information solely from the usual suspects of the mainstream news media, you did not hear about the hundreds of dissidents who were brutally victimized by the apartheid Castro dictatorship and violently arrested simply for wanting to be free and for their human rights to be respected.

Instead, you heard about the wonderfully magnanimous reforms of murderous Cuban dictator Raul Castro and the CELAC 2014 lovefest where Latrine American leaders came to pay homage to and kiss the ring of the Fidel, the Western Hemisphere’s longest lasting and bloodiest dictator in modern times.

Via the Cuban Patriotic Union (UNPACU):

1,052 ILLEGAL POLITICAL DETAINEES IN JANUARY, A NEW RECORD IN CUBA

When are the world leaders going to help Cuban Human Rights activists effectively overcome this outrageous dictatorship from inside the island?

–  January 2014 sets the initial count for a record repression year. It is the 3rd highest repression month in the last decade, and confirms the tendency initiated last year.

– Only one month has been necessary to reach half the numbers of repression of the whole year 2010.

– «In all cases were arbitrary arrests without a warrant, and predominated the police kidnapping without giving away the whereabouts of detainees or allow them to communicate immediately, via telephone, with their families or lawyers.»

– Among all 1,123 detentions, «79 assaults, 91 acts of harassment, 89 “acts of repudiation”  [Government raids in the houses of activists to disown them verbally and physically in public], and 53 acts of vandalism against homes of peaceful dissidents», said the Cuban Commission for Human Rights and National Reconciliation (CCDHRN).

– In the words of the CCDHRN, «The Government of Cuba exhibited like never before his enormous capacity of social control and intimidation a week before celebrating the CELAC Summit II. This was made clear by deploying thousands of secret political police and other repressive bodies and paramilitary elements that remained for days in front of, or in the access to the homes of hundreds of opponents who, mostly, were subjected to de facto houses arrests without a warrant. Main goal: silencing dissident voices».